What does income inequality mean?

The term income inequality refers to a state of unequal levels of income among members of different groups, such as between individuals in a particular country or between different countries.

Income is the money that a person adds to the money they already have—often primarily through wages paid by their employer, but also in other ways, such as investments.

Income inequality statistics often compare the lowest and highest income brackets. This is often presented by giving a percentage of a population and stating what portion of the overall income is earned by that percentage.

There are a few terms that sound similar to income inequality but that are used in distinct ways.

The term wealth inequality is often broader and uses wealth to refer to the entirety of a person’s monetary assets (all the money they have), not just their income (which can be thought of as the money that a person adds to their existing wealth).

The terms wage gap and pay gap typically refer to the differences in the average pay of individuals who do the same job. For example, in the US, many studies show a wage gap between men and women, with women earning less for the same roles (and women of color often earning even less).

The term income inequality is often used to imply that different people’s levels of income are not just unequal but unfair due to being the result of systemic factors. For this reason, it’s a term usually used by people who believe that income inequality is a problem (and a widespread and increasing one).

Example: Reports repeatedly show that income inequality has continued to increase, with the top earners earning more and more and the lowest earners continuing to earn the same. In other words, the rich are getting richer while the poor stay poor.

Where does income inequality come from? 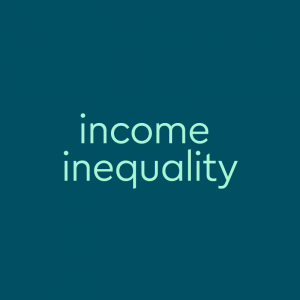 Along with the gap between the highest and lowest earners (cited above), 2019 statistics compiled by the US Census Bureau also show large gaps in average yearly income among several different groups and categories, including:

Some economists and other observers state that income inequality is (at least partially) a natural result of the economic conditions created by free trade. However, many others argue that the greater level of income inequality seen in the US and other countries is due to systemic factors that unfairly widen the gaps in the incomes of different groups. Some activists and politicians have proposed or called for policies aimed at lessening income inequality by addressing such factors, including racism, misogyny, political corruption, unequal political power based on wealth or social class, and unequal tax burdens on the rich and the poor.

Learning gaps are not a student or teacher capacity problem. They are a public funding problem. We can not address learning opportunity until we address income inequality and its intersection with race, gender, and disability. Learning benchmarks obscure learning conditions.
@BBFarhadi, April 25, 2021
More than 420 million wild animals have been traded in 226 nations over two decades, according to new figures. Researchers say income inequality is driving the trade and suggest high-income countries should pay poorer ones to conserve wildlife.
Helen Briggs, BBC, May 5, 2021

The term income inequality is often used by those who believe it is a widespread problem that results from systemic factors. It has become a frequent topic in US politics that’s often discussed alongside similar issues, including wealth inequality and wage gaps.

Here’s why he believes our economy must provide for the vulnerable as it recovers.https://t.co/8HjPg1cnnD

Keeping workers employed during the worst phase of a crisis can reduce income inequality. Ramping up job reallocation efforts during the recovery can further bend the inequality curve over the medium term. Read more in our latest #IMFBlog: https://t.co/kuG5WWJstq pic.twitter.com/Jql70NRC96

The investigation my colleagues kicked off today makes concrete something that economists have understood and debated for years: Wealth inequality has actually increased much more than income inequality, and the tax system isn't doing much about it. 1/ https://t.co/Y6F1r7o41o

This is not meant to be a formal definition of income inequality like most terms we define on Dictionary.com, but is rather an informal word summary that hopefully touches upon the key aspects of the meaning and usage of income inequality that will help our users expand their word mastery.