What is the Mid-Autumn Festival?

The Mid-Autumn Festival is a harvest festival in celebration of the fall season. It originated in China and is now celebrated in many places in East Asia and in many Asian communities around the world.

The festival typically coincides with a full moon around the time of the autumnal equinox.

It is also called the Moon Festival or the Mooncake Festival. Traditional celebrations of the Mid-Autumn Festival usually involve making and eating round pastries known in English as mooncakes, which are traditionally filled with red bean and lotus seed paste (and sometimes egg yolks in the center, representing the moon).

Another tradition involves floating lanterns with wishes written to the moon goddess Chang’e (see the next section for more about her story and how it relates to the festival).

The Mid-Autumn Festival is among the most important and popular holidays in Chinese culture, along with the Chinese New Year (Lunar New Year).

Similar holidays are celebrated in other Asian countries. A related festival in Japan is called Tsukimi, and a related one in Korea is called Chuseok.

⚡When is the Mid-Autumn Festival?

Celebration of the Mid-Autumn Festival usually lasts at least a few days, but the official date is the 15th day of the eighth month of the Chinese calendar. Because the Chinese calendar is a lunar calendar, the corresponding date changes from year to year.

Where does Mid-Autumn Festival come from? 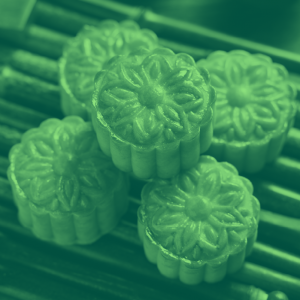 The Mid-Autumn Festival has been celebrated since at least the time of the T’ang Dynasty, which began around 618 c.e.

In Chinese culture, many traditions associated with the Mid-Autumn Festival are based on the story of the moon goddess Chang’e and her husband, the archer Hou Yi. Hou Yi was given an elixir of immortality as a reward for shooting down nine of the 10 suns that were causing droughts across the land. Chang’e discovered a plot to steal the elixir and decided to foil the plan by drinking the elixir herself. Chang’e then became immortal and floated all the way to the moon, never to be seen again. According to the legend, Hou Yi prepares a feast each year during the mid-Autumn full moon in the hopes of seeing Chang’e’s shadow.

Happy Mid-Autumn Festival! I hope those living and studying overseas can enjoy the holiday. I hope everyone can eat sweet moon cakes!
@layzhang, September 20, 2021
Full moon seen between Petronas Twin Towers (KLCC) during mid-autumn festival in Kuala Lumpur, September 21, 2021. On the 15th of each lunar calendar month, the moon is at its roundest and brightest, symbolizing togetherness and reunion in Chinese culture.
@SafwanZaidon, September 21, 2021
The Mid-Autumn Festival, also known as the Moon Festival, celebrates this seasonal change. The festival originated in China, but similar full moon traditions are practiced across East and Southeast Asia. From eating round-shaped mooncakes to lighting lanterns, this time is set aside for being with loved ones.
Mallory Cheng, WUWM, September 21, 2021
SEE MORE EXAMPLES

More information and context on the Mid-Autumn Festival

What are other words used in discussion of the Mid-Autumn Festival?