Feedback
if you can't handle ...
It’s a trap

It’s gonna be May

What does It's gonna be May mean?

It’s gonna be May is a popular meme based on how Justin Timberlake sings the lyric “It’s gonna be me” from NSYNC’s hit 2000 song “It’s Gonna Be Me.” The meme is used to make various jokes each year leading up to the month of May. In 2021, former NSYNC member Joey Fatone proposed creating an official It’s gonna be May holiday to celebrate.

May the Fourth be with you, Star Wars Day, Hey Girl, The Duck Song, hot girl summer

Where does It’s gonna be May come from? 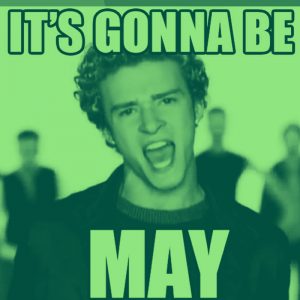 The boy band NSYNC’s “It’s Gonna Be Me” was released on their second album, No Strings Attached, in 2000. The song boasts that a man will get a jaded woman to love him. As its chorus goes: “Baby when you finally / Get to love somebody / Guess what / It’s gonna be me.” For the final line, band member Justin Timberlake notably stylizes his pronunciation of me to sound more like may.

In January 2012, Tumblr user amyricha played with this pronunciation, posting a meme of a young Justin Timberlake with the text It’s gonna be may. Later that March, BuzzFeed notably posted a picture of the meme as printed out and pasted on the last day of April on a calendar. The short article was titled “Wait, What Month Is It Going To Be?”

It’s gonna be May quickly spread on the internet, becoming so popular that by April 2014, President Obama captioned a picture of himself with Justin Timberlake in the White House with It’s gonna be May. The post received almost half a million likes. In 2016, Justin Timberlake canonized the meme when he tweeted on April 29th: “Everybody … It is ACTUALLY GONNA BE MAY! #canyoumemeyourself.” Over 50,000 people favorited the tweet.

Everybody… It is ACTUALLY GONNA BE MAY!#canyoumemeyourself

Rival boy bands joined the fun, too. In 2015, the Backstreet Boys posted a response meme featuring the face of member Nick Carter and As long as you love May, playing on the band’s 1997 single “As Long As You Love Me.” Other songs have gotten similar meme May treatments: You’re Gonna Love May, a play on a verse in “And I Am Telling You I’m Not Going” from the Broadway musical Dreamgirls.

It’s gonna be May further spread in popular culture, with media outlets such as Good Morning America, Time, and Entertainment Weekly commenting on the meme in 2017. By then, former NSYNC member Lance Bass described the meme as an “annual tradition.”

It’s gonna be May has become so annually viral, as Vox media has reported, that YouTube plays of “It’s Gonna Be Me” have spiked near the end of April since the meme started. As is common in contemporary internet culture, many people have self-referentially “remixed” the meme. One variant fuses It’s gonna be May with the “May the Fourth be with you” riff on Star Wars Day. Another plays on the short Roses are red poem, featuring a picture of Timberlake captioned: “Roses are red, April is grey, but in a few days …” with the meme text left implied.

During the coronavirus pandemic, It’s gonna be May was used a punchline for how long it would be until stay-at-home orders were lifted. And yes, Justin Timberlake once again joined in on the joke to encourage people to stay at home. (To help slow the spread of the virus, many places around the US and world required people to shelter in place except for essential work or activities.)

When’s the next time we leaving the house, @lizzobeeating?? But, for real… jokes aside… STAY IN!!!!

In 2021, former NSYNC member Joey Fatone announced his support for an official holiday celebrating the meme: “There’s got to be a national holiday that we have to do with *NSYNC. Even if we never get back together as a group, there should be a national ‘It’s Gonna Be May’ holiday.”

Examples of It’s gonna be May

between it’s gonna be may and may the fourth be with you this month gets off to a pretty tough start
@adamlondon, May 4, 2019
Wore my @NSYNC shirt to the gym and the instructor ended class by saying, “No announcements except for it’s gonna be May”

Another quarantine-related meme read: “Me: when can I leave my house again? The government:” with a clip of Timberlake and the words, “It’s gonna be may,” shown below.

Who uses It’s gonna be May?

It’s gonna be May is widely used in the months leading up to May as a fun internet tradition. People may post the original meme, its simple text, or subsequent variations on it, including GIFs.

The meme has become so popular that it’s often referenced ironically, used to comment on meme and internet culture more generally. Its popularity has also led some people to reference It’s gonna be May in colloquial speech.

As a society, it’s clear we have not progressed from “It’s gonna be May” memes.

Members of NSYNC and the entertainment industry and media often take advantage of the It’s gonna be May meme when discussing the boy band, which experienced a nostalgic resurgence in the 2010s. For instance, in March 2018, the Hollywood Walk of Fame cleverly announced it was unveiling its star for NSYNC on April 30 that year.

This is not meant to be a formal definition of It’s gonna be May like most terms we define on Dictionary.com, but is rather an informal word summary that hopefully touches upon the key aspects of the meaning and usage of It’s gonna be May that will help our users expand their word mastery.