Do you ever stop and look at the shape of our alphabet? Each letter looks natural to us now, but all those lines and circles have unique histories. It’s easy to make assumptions that our letters make sense, that they developed in some orderly logical way, and one reasonable assumption would be that P and R are related to each other based on their form. P and R may look like they are related, but they actually come from two distinct letters. (The study of the shapes of letters is called orthography.) 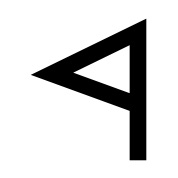 The letter R came from the Phoenician letter rosh (see image at left). The word rosh meant head and the letter resembles a neck and head. It also looks like a backwards P. When the letter entered the Greek alphabet, the Greeks turned the letter around and added the short leg to the side. They called this letter rho.

(Want to know why the uppercase R and lowercase r look so different? Learn their story here.)

The letter P has a more meandering history. The Phoenicians used a shape like an upside down J to represent the sound pe. (This sound is still represented by a similar letter in Hebrew.) However, the Greeks changed the shape dramatically to the letter pi (yes, just like the mathematical symbol). There is a historical break after the Greek letter. The Romans ignored the Greek pi and instead used the Etruscan letter for P, which was closer to the Phoenician pe. The Romans turned it around and gave us our contemporary letter.

This may be a surprise, but the letter P is actually common in English. Almost 10% of English words begin with the letter P!

(Whatever happened to the Old English letters, thorn and wynn, that kind of looked like a P? Find out here.)

What other letters are you curious about?

Home / Word Facts / Were P And R Once The Same Letter?