What is an October surprise?

An October surprise is an unexpected event or breaking news story that generally happens in October and potentially upends the outcome of an election, especially a U.S. presidential election. (October is a crucial month leading up to Election Day in the U.S., which falls in early November).

October surprise has been used to refer to both planned and unplanned events. Whether or not October surprises actually have significantly impacted election results is debated.

October surprise has been used in political analysis since the 1980s, but it was originally used in the context of retail sales in the early 1900s.

Where does October surprise come from? 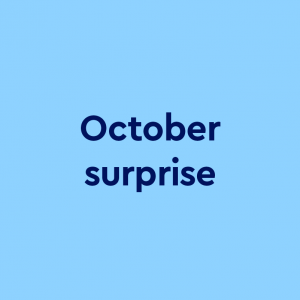 October surprise appears to have first entered the realm of politics during the 1980 presidential election between incumbent Jimmy Carter and challenger Ronald Reagan. Reagan’s team worried that Carter would reveal that he had negotiated the release of the American hostages from Iran immediately before Election Day. They referred to a possible sudden reveal as an “October surprise.” The month of October is used in the phrase because American elections occur in early November.

Usually, the term October surprise is used to mean an event that was planned or appears to have been planned. Often, conspiracy theories emerge that seemingly “random” sudden reveals have been orchestrated by one of the candidates. In fact, it is still a common myth that Reagan actually negotiated with Iran against the release of the hostages before the election to prevent his feared October surprise.

I think we can all agree that this is enough surprises for October. We’re good, October.
@juliaioffe, October 2, 2020
As the US election approaches, political pundits worldwide have begun to speculate on an “October Surprise” ahead of the November 3 vote.
Bhim Bhurtel, Asia Times, September 7, 2020

The term October surprise always pops up during presidential elections.

After this week's Wall Street melt down, it scares me to think what the October surprise is going to be.

Not Trump's endless lies. Not his sexual assaults. Not his fraud. Not his abuse. Clinton's e-mails are the October Surprise?

This is not meant to be a formal definition of October surprise like most terms we define on Dictionary.com, but is rather an informal word summary that hopefully touches upon the key aspects of the meaning and usage of October surprise that will help our users expand their word mastery.