all of these hoes

What does all of these hoes mean?

All of these hoes is a derogatory way that some hip-hop artists refer to the women they’ve slept with or been in relationships with. It can also be used as a spiteful reference to women in general.

Where does all of these hoes come from? 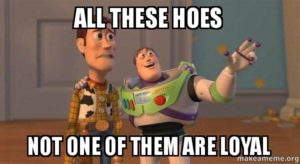 Recorded since at least the 1960s, ho is a Black English pronunciation of whore. While technically ho is a rude word for a sex worker, it’s been used as a sexist slur against women more generally since around the same time.

It’s this notion of a ho, as in any woman, that’s at play in the misogynistic expression all of these hoes. This phrase is closely associated with hip-hop and rap music. One early example comes from the Notorious B.I.G.’s 1999 track “Big Booty Hoes,” where he raps that “all of these hoes do that shit,” i.e., sexual activity.

In the years since, the line all of these hoes has appeared in numerous hip-hop songs men talk about the women they’ve had sex with them, how they got them, what they’re like, and so on.

In 2018, rapper Travis Scott released the track “Sicko Mode,” featuring Drake. It debuted at #4 on the Billboard Hot 100 before climbing to #1. In the song, Scott boasts about “all of these hoes I made off the records I produced,” referring to all of the women he’s hooked up with because of his music.

Because of the way that Scott pronounces the word hoes on the track, not a few people think the line is all of these o’s.

All of these o’s I made off records I produced https://t.co/P8cDyXsFYt

Examples of all of these hoes

I cannot wait to flex on all of these hoes and become That Bitch™️ since y’all don’t know how to act
@lmaolaurenn, December 2018
"Before Kanye West, rappers weren't wifing all these hoes. Rappers would be secure with their woman," said Luke.
Uncle Luke quoted in AllHipHop, August 2015 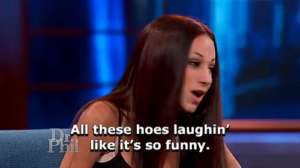 Who uses all of these hoes?

As noted, all of these hoes is frequently found in hip-hop music. It also featured in black slang and its mainstream imitators.

Calling women hoes is considered offensive and inherently misogynistic, so we wouldn’t recommend using all of these hoes to refer to the women in your life. It especially refers to women who lack class or are considered promiscuous.

This is not meant to be a formal definition of all of these hoes like most terms we define on Dictionary.com, but is rather an informal word summary that hopefully touches upon the key aspects of the meaning and usage of all of these hoes that will help our users expand their word mastery.

albatraoz
alpha
Home / Words / Slang / all of these hoes