What does coyote ugly mean?

Coyote ugly refers to a popular film from the year 2000 featuring sexy female bartenders. It takes its name from slang for a one-night-stand partner later regretted because they are unattractive.

Where does coyote ugly come from? 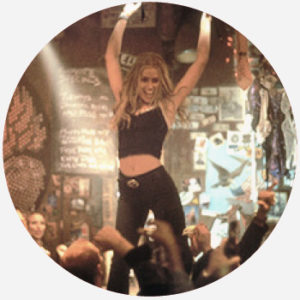 The term coyote ugly has existed since at least 1984 as a joke to refer to an ugly one-night-stand partner. The definitive origin of the term is unknown, but popular etymology suggests that it drew inspiration from actual coyotes, as they tend to be so desperate to escape from traps that they chew their own limbs off. Other early uses imply the sexual partner was as ugly as a coyote, hence coyote ugly.

In 1993, a bar called the Coyote Ugly Saloon was founded and later became the setting of the 2000 movie Coyote Ugly. The movie is about a nightclub staffed by a group of attractive women who act provocatively toward patrons, including wearing sexy clothing and dancing atop the bar as they serve alcohol in elaborate ways. The film’s premise and title was inspired by a 1997 GQ article describing an employee’s experience working there.

In the movie, one of the characters describes a one-night-stand scenario with a person who is so ugly that in the morning, upon discovering them laying on your arm, “you’d rather chew off your arm than risk waking them.” The character states that this is coyote ugly.

Last night I lived my coyote ugly dream of dancing on top of a bar.
@Adelinnooo, Jan 2018
My mom let me watch Coyote Ugly when I was a kid so that’s probably why I love elevated surfaces and making terrible mixed shots.
@AnaaaAriii, Jan 2018
There's no end to the unrealistic NYC apartments on the small and silver screen, but Piper Perabo's Chinatown apartment in the classic 2000 film Coyote Ugly is a noteworthy offender.
Rebecca Fishbein, Gothamist, August 2017
SEE MORE EXAMPLES

Outside of the real-life bar or film, coyote ugly is occasionally used as derogatory slang for an unattractive “hookup” on social media or in informal speech.

People may also mention a coyote-ugly moment. This typically means that they would like to do (or have previously done) something similar to events in the movie, especially dancing on a bar top.

This is not meant to be a formal definition of coyote ugly like most terms we define on Dictionary.com, but is rather an informal word summary that hopefully touches upon the key aspects of the meaning and usage of coyote ugly that will help our users expand their word mastery.