What does Coulter's Law mean?

Named after a 2015 tweet from provocative conservative political commentator, Ann Coulter, Coulter’s Law states that the longer it takes the news media to identify a mass shooter in the United States, the less likely it is to be a white male.

Where does Coulter’s Law come from? 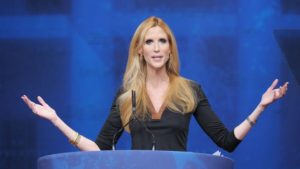 Coulter’s Law began with a tweet by Ann Coulter, a conservative political commentator and writer known for her outspoken xenophobia. On December 2, 2015, Coulter tweeted a response to the mass shooting in San Bernardino, California perpetrated by a couple from Pakistan: “The longer we go without being told the race of the shooters, the less likely it is to be white men. #sorryNYT.”

The longer we go without being told the race of the shooters, the less likely it is to be white men. #sorryNYT

Coulter’s tweet criticized the media for, in her perception, shying away from immediately disclosing  the racial identity of a shooter when that person is not a white male, the typical identity of mass shooters in the US. The idea is that, due to their liberal worldview, the mainstream media deny evidence that might confirm conservative fears of Islamic terrorism in the US. 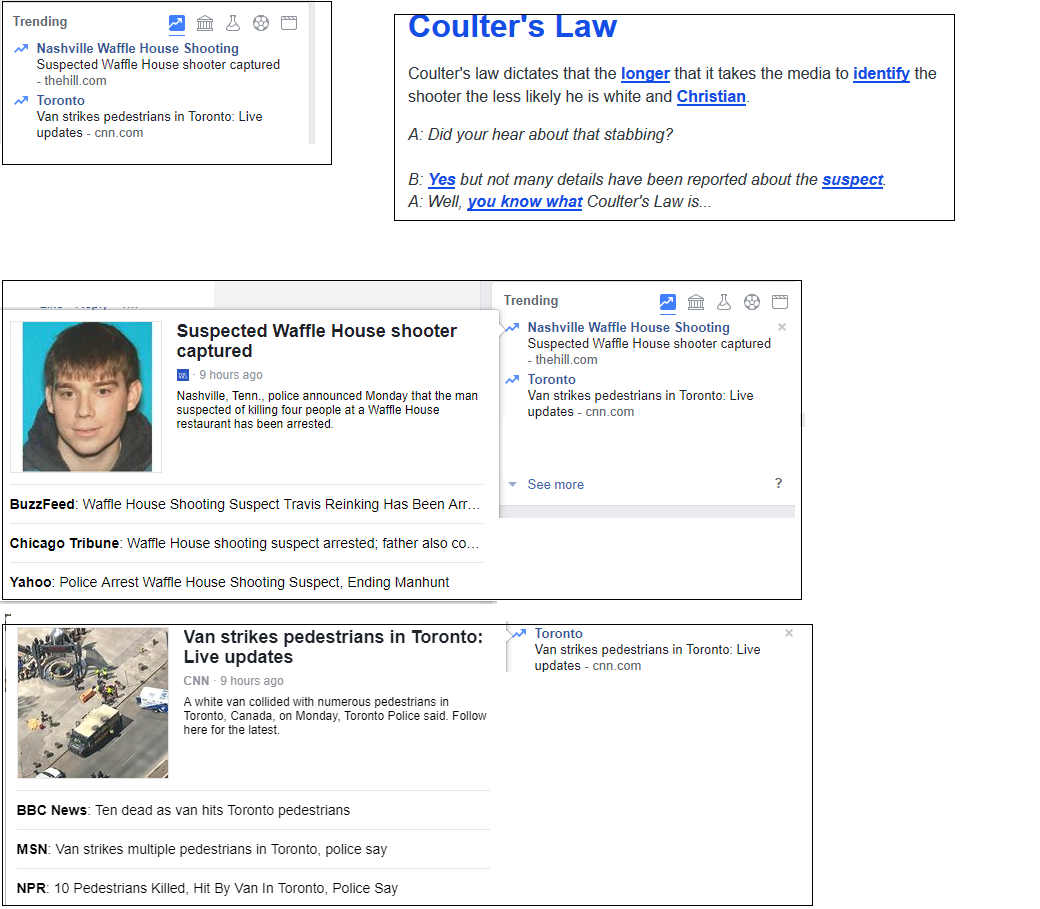 Calling Coulter’s Law a law follows the lead of other informal “rules” or observations online, such as Poe’s Law or Godwin’s Law. Urban Dictionary added an explanation for Coulter’s Law in 2016. Coulter herself hasn’t, as far as we know, acknowledged her namesake, but she doesn’t seem to mind that people invoke it in discussion every time there is a mass shooting.

#London remember Coulter's Law: The longer it takes to reveal the name, the more likely it's "Mohammed"
@F111F_Vegas, March 2017
It’s not really based in anything other than narrative belief. The time it takes to identify a suspect varies and is largely dependent on police releasing that information to the media...But what Coulter’s Law does comport with is the belief those on the right have of how the mainstream media cover acts of violence.
David Covucci, The Daily Dot, July 2018 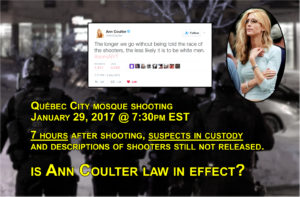 Those who use Coulter’s Law tend to align with Coulter’s xenophobic ideology. Typically, these internet commentators will write such as things as Coulter’s Law is in effect when mainstream media do not disclose the racial identity of a shooter in the hours following news of a mass shooting.

Discussion about Coulter’s Law is very common on the subreddit r/The_Donald, a forum on Reddit that supports Donald Trump through commentary and memes. These Redditors not only comment on violent crimes (and so-called examples of Coulter’s Law) in the US but also elsewhere in the West, including Canada and the UK.

This is not meant to be a formal definition of Coulter’s Law like most terms we define on Dictionary.com, but is rather an informal word summary that hopefully touches upon the key aspects of the meaning and usage of Coulter’s Law that will help our users expand their word mastery.