What does do you mean?

Hey, do whatever you think is best for yourself, march to your own beat, focus on what you have to get done, do you. The expression do you or you do you means to do what’s right for you, whatever that may be.

Where does do you come from? 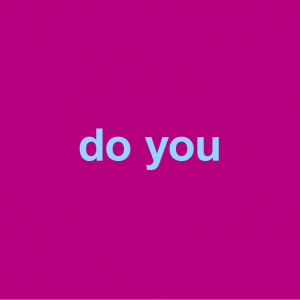 Do you may originate as a variation on do your thing, an expression that also means “do what you think is right for you and don’t worry what others think about it.” Do your thing dates back to at least 1841 (Ralph Waldo Emerson used it in the essay “Self-Reliance”), though the phrase spread in the 1960s with the free-spirited, hippie counterculture.

Do you or you do you spread via Black slang during the early 2000s, apparently as a shortening of the longer expression you do you and I’ll do me, meaning each person has to do what’s best for them. One early instance of do you comes in Funkmaster Flex’s 2000 track “Do You.” In the song, Funkmaster Flex counsels others to do their own thing and not try to be like him: “Do you and I’ll do me / to me you’ll see how real you’ll be.”

As do you spread into more mainstream use, its meaning expanded. Many came to use do you as a way to show understanding when people get busy or have more pressing obligations they have to tend to.

Do you bro, if your busy dont sweat it take some time all these giveaways prolly taking a lot outta u💯💯

Others came to use it with skepticism, and the phrase can imply that you don’t think that someone is going about something in the best way, but you acknowledge that it’s nevertheless their choice.

Examples of do you

if you’re reading this , i love you bro , you’re the shit ! fuck everyone who says otherwise ! they’re haters who want to see you fail in life but show them wrong , do you bro ! grind don’t stop baby 😉  !
@dianaaelissa, August 27, 2018
Over the decades, that sense of we-ness began to turn into a sense of I-ness or you-ness. You can see it in today’s commencement clichés: Follow your passion, march to the beat of your own drummer, listen to your own heart, you do you.
David Brooks, The New York Times, June 28, 2018
Hey man, you do you and kudos for standing your ground. You have your principles and that’s cool. We as Astros fans run into fans from some many other fan bases that don’t. Sometimes it’s hard to sort them out.
@Dafedm1, August 13, 2020
SEE MORE EXAMPLES

Who uses do you?

Do you and you do you are often used in playful celebration of people acting like their unabashed, lovably dorky selves, as a sort of answer to the judgment of the haters. You like mayonnaise and peanut-butter sandwiches? You do you.

If this dude doesn't have a date by the 4th quarter tonight over on James Island, something is insanely wrong with this world. You do you man, You do you! pic.twitter.com/ekmdiuXb4n

But while you do you is meant to free one from judgment, it can also more ironically suggest someone is dismissing or criticizing someone’s choices or conduct, as if to say, I don’t approve, but you’re going to do it anyways.

"You do you" sounds nice but basically translates to "go F yourself."

So Logan Paul takes part in a staged fight, earning him $$$ and suddenly people forgive him & are shocked when others don’t do the same 😂

You do you but reminder: he filmed a dead body, tased a dead rat, faked a shooting, shoved dead fish in people’s faces… need I go on.

Author Colson Whitehead notably critiqued the phase, alongside the tautological it is what it is and haters gonna hate, in 2015 as a self-justifying phrase that “perfectly captures our narcissistic culture.”

This is not meant to be a formal definition of do you like most terms we define on Dictionary.com, but is rather an informal word summary that hopefully touches upon the key aspects of the meaning and usage of do you that will help our users expand their word mastery.