What does drinkin' Henny mean?

Drinkin’ Henny is slang for “drinking Hennessy,” a leading brand of cognac popular in hip-hop and Black culture.

Where does drinkin’ Henny come from? 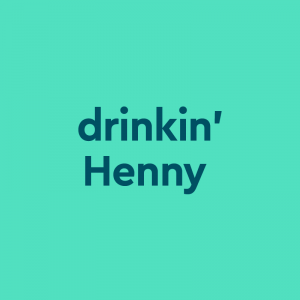 Drinkin’ Henny originates in Black slang the 1990s. Henny is short for Hennessy, the world’s biggest seller of cognac, a type of brandy. Drinkin’ represents what is popularly referred to as “g-dropping,” in which words ending in -ing  are pronounced with an n. This phenomenon is common in English, including Black English.

Hennessy was founded in the 1760s, but it developed an intimate relationship with Black culture after Black soldiers drank the liquor while stationed in Europe during World War I and II. Following the war, Hennessy became a pioneer as one of the first brands to market themselves in the Black community. In that community as well as in Chicago culture, drinkin’ Henny became not only a pleasurable pastime but also a sign of luxury. 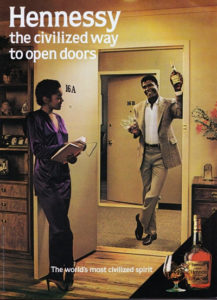 The phrase drinkin’ Henny was popularized in the 1990s–2000s when hip-hop stars such as 2pac, Snoop Dogg, the Notorious B.I.G., and Dr. Dre started spitting about drinkin’ Henny and Henny more generally. One early song to feature Henny was N2Deep on their 1992 “Back to the Hotel.” Henny has since appeared in countless rap songs, including the 2013 anthem “Henny” by Mack Wilds.

Drinkin Henny, goin brazy, poppin pillies 💥 🍾
6ix9ine.ny, Instagram, October 2018
50 Cent is back to trolling Busta Rhymes for drinking his Henny out of a straw.
M. Stephens, Urban Islandz, September 24, 2018
me earlier: i am NOT drinkin henny tonight someone: you want henny?? me: ABSOLUTELY
@BossettexBella, August 22, 2020
SEE MORE EXAMPLES

Henny and various ways of consuming it are widespread in hip-hop lyrics. It’s used to represent getting drunk but also as a symbol of opulence and success. Drake, for example, was drinkin’ Henny on his 2015 “No Tellin'”: “Suitcase, I been livin’ out a suitcase / Still drinkin’ Henny, if it’s done, I’ll take the D’usse.”

Hip-hop has helped popularize drinkin’ Henny in more mainstream culture. When people use it, they are often actually drinking the cognac but may also just mean they are tying one on more generally.

my coworkers drunk af rn. we been drinkin henny

This is not meant to be a formal definition of drinkin’ Henny like most terms we define on Dictionary.com, but is rather an informal word summary that hopefully touches upon the key aspects of the meaning and usage of drinkin’ Henny that will help our users expand their word mastery.