What does fuck a duck mean?

Exclaiming fuck a duck conveys surprise, frustration, anger, or other such heightened emotions. Telling someone to go fuck a duck is a more colorful way of telling them to go screw themselves.

duck lips, fuck this shit I'm out, what the actual fuck, asshat

Where does fuck a duck come from? 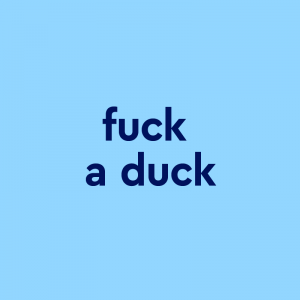 In the late 1700s, a duck-fucker was, apparently, an actual job. This person was in charge of taking care of poultry on warships, and the term likely originated as a bit of teasing among shipmates.

Fuck a duck is first attributed to Henry Miller’s salacious classic Tropic of Cancer. Miller used fuck a duck with a mix of frustration and admiration, along the lines of a bemused “Well, goddamn!” The expression likely originated as a funny and fun-to-say rhyme.

In the 1970s, our feathery friend duck-fucker came back, this time as a slang equivalent to asshole.

Fuck a duck jumped from literature to the schoolyard and internet with “The Zoo Song,” a comedy song about bestiality sung to the tune of “Row, Row, Row Your Boat.” The song begins “Fuck, fuck, fuck a duck, screw a kangaroo” and goes on to rhyme various slang terms for sex acts with the names of other animals.

Fuck a duck garnered mainstream attention in 2011 when Aerosmith singer Steven Tyler made “Shit fire and save matches, fuck a duck and see what hatches” his catchphrase during his stint as a judge on American Idol. To the best of our ability, we translate this Tyler-ese as: “Well, that was interesting. Let’s see what comes of it.”

Examples of fuck a duck

Quite how the harmless duck found itself the target of the exasperated exclamation “fuck a duck” is a mystery to historians of Britain’s verbal curiosities—though the internal rhyming scheme certainly didn’t hurt.
Rufus Lodge, Slate, September 4, 2014
So many good things coming my way and I still can’t sleep at night. Fuck a duck.
@i__pooteD, September 1, 2020
Fuck a duck and see what hatches.....can we say suck a duck instead?--- Steven Tyler and Jennifer Lopez #americanidol
@BrownChompSoup, May 18, 2011
SEE MORE EXAMPLES

Who uses fuck a duck?

Fuck a duck is used as an expression of surprise or frustration. You might shout fuck a duck if you stub your toe. Oh, fuck a duck!

A tweet of mine has a not insignificant number of retweets and it has a typo in it, fuck a duck

If you’re looking for a more creative way to tell off the duck-fuckers in your life, yelling Go fuck a duck! can be used for Up yours! or Go to hell!

This is not meant to be a formal definition of fuck a duck like most terms we define on Dictionary.com, but is rather an informal word summary that hopefully touches upon the key aspects of the meaning and usage of fuck a duck that will help our users expand their word mastery.