Feedback
mean the world
means to an end

What does mean-mugging mean?

Have you ever seen someone look at you a little funny, or give you a dirty look? That’s mean-mugging, or the act of glowering at someone with an intimidating, irritated, or judgmental facial expression.

Where does mean-mugging come from? 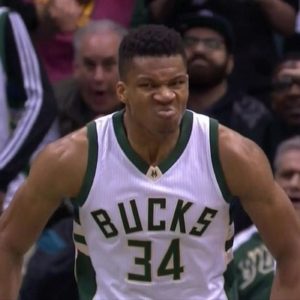 Let’s set a scene. While driving, someone cuts you off. You speed up, and as you pass them you give them a scowling, frowning, or scrunched-up look. You just mean-mugged them, conveying you are miffed.

Mean, here, is “hostile” or “nasty,” and mug is slang for “face.” Mug in this sense can be traced back to the 18th century and may, fun fact, come from drinking mugs painted with or shaped like grotesque faces. So, you wouldn’t really call a beautiful or pleasant face a mug. Mug tends to be reserved for a stank face, if you will.

Mean-mugging, colloquially pronounced mean-muggin‘, is credited to black slang in the early 2000s. While originally referring to the intimidating look delivered by the neighborhood tough guy, mean-mugging can now more humorously describe, say, the bored, exasperated expression of an overworked DMV employee. 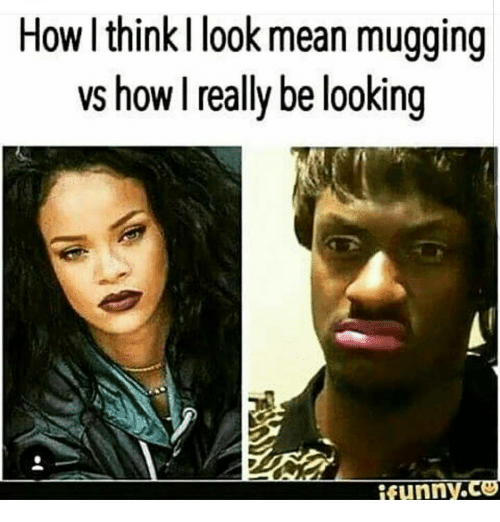 Girls swear im mean muggin but bitch i just cant see
@sznpao, October 2018
After the dunk, Washington scrunched his face together, stuck out that bottom lip and stared into the baseline camera. He held the look as he turned around and circled back to the free throw line, much to the delight of his teammates and Kentucky fans...The mean mug went national a week later.
Ben Roberts, Kentucky Sports, March 2018 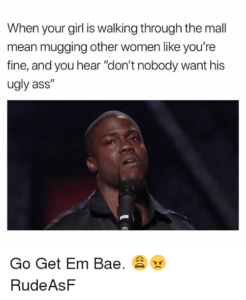 The act of displaying a sullen stare–or mean mug, as it’s called–is mean-mugging.

Mean-mugging someone isn’t exactly a nice thing to do to, even if you’re doing it unintentionally. (Ever been accused of resting bitchface?) The perception of someone mean-mugging is that they’re stuck-up, peeved, offended, or otherwise just unpleasant. Others, however, may choose to flash a mean mug when acting tough or copping an attitude.

Honestly fuck all of the forever 21’s in the valley. You bitches have mad attitude and make my shopping atmosphere hostile af. I don’t know why half of you mean ass bitches get hired fr. Mean muggin everyone in the damn store.

Sports publications have gone wild with images of players showing their mean-mugging displeasure with a call or after an impressive play.

Even babies aren’t safe from being accused of mean-mugging, and there are whole online forums dedicated to parents posting their kid’s mugs. People on the internet, ever fond of cute social media image captions, will often post a selfie and proclaim that they’re mean-mugging. Anything for the likes, right?

Ohmygod Iman Shumpert's baby has a blanket with Derrick Rose's kid's mean-mugging face all over it 😂 pic.twitter.com/Nb8b0jtujr

This is not meant to be a formal definition of mean-mugging like most terms we define on Dictionary.com, but is rather an informal word summary that hopefully touches upon the key aspects of the meaning and usage of mean-mugging that will help our users expand their word mastery.