What does trippin' mean?

You trippin’ means you’re acting a fool, thinking crazy thoughts, or are maybe high on mushrooms. Trippin’ out is “freaking out” or “being extremely high.”

Where does trippin’ come from? 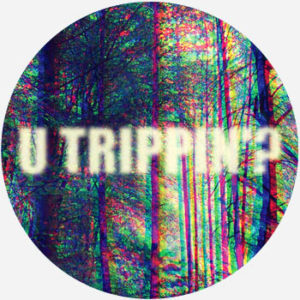 In drug slang, a trip is a metaphor for the hallucinatory high produced by LSD, magic mushrooms, and other drugs. The term dates back to the 1920s.

When people are tripping on hallucinogenic drugs, they can act very erratic, which probably accounts for the use of trppin’ for “acting insane, foolish, or without thinking” in general slang by the late 1980s. 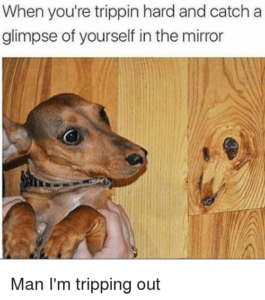 The slang set trippin’ surfaced in 1990s West Coast gang culture for “killing a gang rival to show off your power.” Set alludes to a subset of a larger gang (e.g., the Pirus are a set of the Bloods) and trip is black slang for “lose control,” as we’ve seen. Hip-hop artists like Dr. Dre, Coolio, and the Wu-Tang Clang all mentioned set trippin’, often just trippin’ for short, in their lyrics around this time.

In a relationship, your girl is suppose to come first right? before friends, plans and etc? or am I trippin? 🤔
@iiAmSeann, August, 2017
We've talked since then, and it's been cool...Nobody's trippin' except for everybody else.
Tiffany Haddish quoted by Dana Rose Falcone, People, May, 2018
For Halloween my junior year I had an edible and I was trippin out so bad I stayed home and didn't even go out lol
@sad_kittxn, October, 2014
SEE MORE EXAMPLES

The expression you trippin’ is frequently used to call out someone thought to be acting out of line or foolish.

The slang is so common it inspired the title of a 1999 film, Trippin’, starring Deon Richmond as a daydreamer who just can’t get his act together to become a writer and win his prettiest girl.

Trippin’ also gets used when referring to some beef (e.g., I’m not trippin’ over what she said about me). And, tripping is still widely used to refer to being high on hallucinogenic drugs and sometimes just being very high in general.

This is not meant to be a formal definition of trippin’ like most terms we define on Dictionary.com, but is rather an informal word summary that hopefully touches upon the key aspects of the meaning and usage of trippin’ that will help our users expand their word mastery.