Enjoyed by nudists and masturbators alike, NIFOC stands for naked (or nude) in front of computer. It is often used humorously and facetiously online, but you can never be too sure when it comes to the internet.

Where does NIFOC come from? 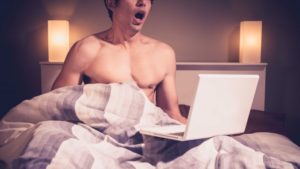 NIFOC, short naked in front of computer, is an internet acronym found in Usenet postings dating back to 1990.

It became more widespread online by 1995, used jokingly in some internet forums and chats—and not-so-jokingly in the context of cybersex or viewing internet pornography. This is not to mention the nudist/naturist computing subculture, who launched the website nifoc.net in 2001.

oh, look, it's saturday night and i'm nifoc instead of being out!

is partially NIFOC, eating peanut butter straight outta the jar. Should shower, but this feels too pleasant for the time being.
@snrang, March 2009
Social media users have been quick to mock the list of codes – including “NIFOC” for “Naked in front of computer” - claiming to have “never heard of them”.
Lauren Fruen, The Sun, March 2017 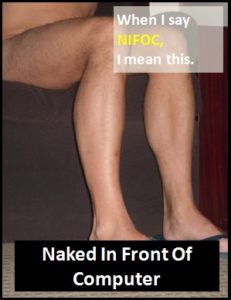 NIFOC is used mostly by pranksters who want everyone to think (or know) they are, well, online and in their birthday suit…

on a call with a customer & nifoc

Do your kids speak in code online? Look out for these!
LMIRL=lets meet in real life NIFOC=naked in front of cam POS = parent over shoulder

This is not meant to be a formal definition of NIFOC like most terms we define on Dictionary.com, but is rather an informal word summary that hopefully touches upon the key aspects of the meaning and usage of NIFOC that will help our users expand their word mastery.