The term queerbaiting refers to the practice of implying non-heterosexual relationships or attraction (in a TV show, for example) to engage or attract an LGBTQ audience or otherwise generate interest without ever actually depicting such relationships or sexual interactions.

For example, a TV show may be accused of queerbaiting when interactions between two same-sex characters are consistently suggestive of sexual attraction or a sexual relationship but the characters never actually enter into such a relationship (including and especially when their sexuality isn’t otherwise discussed or portrayed).

The term queerbaiting is used to criticize the practice as an attempt to take advantage of and capitalize on the appearance or implication of LGBTQ+ relationships without actually having real LGBTQ+ representation.

In June 2021, the term became a topic in the news when some accused singer Billie Eilish of queerbaiting after she posted photos from the set of the music video for her song “Lost Cause.” The video features Eilish dancing and having fun with other women (in ways that some consider sexually suggestive). Eilish posted the photos with the message “i love girls,” which was interpreted by some as being suggestive of a sexual attraction to women.

Others, including some in the LGBTQ+ community, defended Eilish, rejecting the accusation of queerbaiting and further noting that no one should be pressured to reveal or explain their sexuality.

Example: The show faced backlash when fans accused it of queerbaiting by implying that the two male leads were a gay couple despite never actually depicting any relationship between them.

Where does queerbaiting come from? 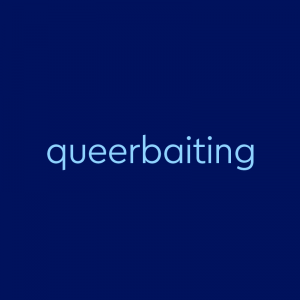 The original sense of the term queerbaiting is modeled on race-baiting, the incitement of racial hatred, often for political purposes. Recorded since at least the 1950s, queerbaiting first referred the incitement of anti-LGBTQ (and early on, specifically antigay) hatred. It’s also necessary to note the term queerbait, an extremely offensive term dating back to at least 1960s for a man (often cishet) considered to be attractive to gay men.

Since at least the 2010s, the term queerbaiting has been used in reference to opportunistic practices of appealing to LGBTQ audiences. The word queer is used to refer to or describe things involving people whose sexual orientation or gender identity falls outside the heterosexual mainstream. (Though the word has a history of being used as a slur, it’s used here in its reclaimed sense, in the context of LGBTQ+ identities.) The word baiting is a form of the verb bait, meaning, roughly, to try to entrap with some kind of trick or deception. Queerbait is sometimes used as the verb form of queerbaiting.

The word baiting is also used in other terms in other ways. The term lesbian-baiting can refer to a specific form of queerbaiting, but it’s primarily used to refer to the antigay practice of labeling a woman a lesbian (often one who’s not) to disparage them.

writing about captain america-related queerbaiting is truly making me feel like time is a flat circle
@Hello_Tailor, March 26, 2021
Billie Eilish is coming under fire this week amid accusations of queerbaiting due to her latest music video and an accompanying Instagram post.
Emma Nolan, Newsweek, June 14, 2021

In its contemporary sense, queerbaiting is used critically, typically by those who are pointing out that the practice is exploitative and is not a substitute for real representation.

This is not meant to be a formal definition of queerbaiting like most terms we define on Dictionary.com, but is rather an informal word summary that hopefully touches upon the key aspects of the meaning and usage of queerbaiting that will help our users expand their word mastery.