Lesbian-baiting is the sexist and homophobic practice of labeling women (especially feminists and women whose behavior doesn’t reinforce traditional gender stereotypes) as lesbian in an effort to slur or diminish them.

Where does lesbian-baiting come from? 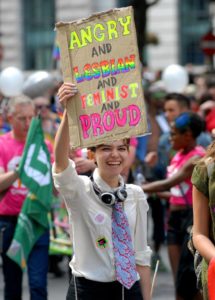 Lesbian-baiting emerges in queer and feminist discourse in the early 1990s, though the practice is much older. Lesbian is a term for a female homosexual while baiting, for “stirring up,” draws from terms like race-baiting.

Lesbian-baiting happens when someone shames a woman into behaving in traditional, patriarchally feminine ways by labeling them as lesbian, regardless of their sexual orientation. If you’ve ever witnessed a woman be called a “dyke” for wearing short hairstyles or pantsuit, or “butch” for fighting on behalf of gender equality, that’s lesbian-baiting. 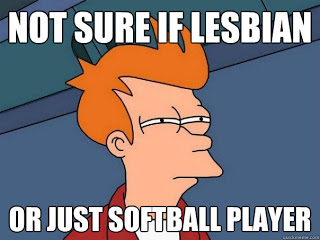 An example of everyday lesbian-baiting / Trans and Godless

This practice is doubly offensive, as it’s inherently both sexist and homophobic. Because of that, it’s frequently used against women in positions of power as a way to detract from their authority or exert male dominance over them.

Lesbian-baiting shouldn’t be confused with queer-baiting, which is when TV shows or films tease homosexual relationships between characters without ever realizing them. The plan here is to bait homosexual viewers without deterring heterosexual ones. Occasionally in this vein, however, lesbian-baiting sees use for media content meant to appeal to lesbian audiences.

you are buying into lesbian baiting and you are throwing other women under the bus. stop that fucking shit.
@sailor_P00N, March 2014
PISSED at Kagan lesbian baiting. We dont ask sexuality of most (straight) judges & politicians. yet lots end up adulterers or closet cases
@meredithfenton, May 2010
Women who report sexual harassment or sexual abuse have all too often been accused of being lesbian. Furthermore, these women find investigations initiated against them after reporting unwanted conduct instead of against their harassers or abusers. Lesbian baiting is a powerful tool to keep women“in their place,” not just in the military, but in other societal contexts as well.
Christin M. Damiano, "Lesbian Baiting in the Military" (journal article), 1999
SEE MORE EXAMPLES

The phrase lesbian-baiting sees primary use in feminist, queer, and sociological discourse, including academic and internet writing on sexism and homophobia.

"A timely read, as demonization of “mannish women” and lesbian-baiting are taking place today." http://tinyurl.com/2b9b27l

But given the greater, popular movement towards gender and sexual equality in the 2000s, lesbian-baiting has spread somewhat into the mainstream lexicon, used by women and queer people disturbed and disillusioned by the phenomenon.

A friend brought up that the new Doctor being a woman will likely result in transphobic jokes and lesbian baiting.
Now I'm sad, because yeah

Case in point… CANADA is not lesbian baiting. Flannel is pretty predominant here as part of our winter 'fashion'. :)https://t.co/cPrY1NyX4P

This is not meant to be a formal definition of lesbian-baiting like most terms we define on Dictionary.com, but is rather an informal word summary that hopefully touches upon the key aspects of the meaning and usage of lesbian-baiting that will help our users expand their word mastery.