What does tango down mean?

Tango down is military slang announcing that an enemy has been defeated in combat. Tango down has been adopted in first-person shooter games when teams are strategizing over audio.

Where does tango down come from? 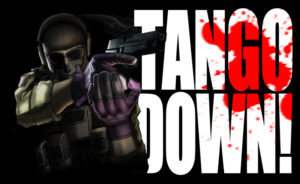 Tango down is said to originate in military slang. In the NATO phonetic alphabet, established by the 1930s, the letter T is tango and became slang for target, or “enemy.” To down a target is “to shoot” them, especially when grounding an aircraft, but also “to neutralize” or “kill” them. Tango down thus means the enemy has been defeated.

Since at least 2008, tango down has been adopted in multiplayer, war-based games like the Call of Duty series. When communicating with teammates, gamers may use tango down to indicate they’ve dispatched a target.

Blacklight: Tango Down was a 2010 first-person shooter set in a steampunk environment. Other brands, particularly those that sell products for firearms, have incorporated tango down in their branding for military authenticity.

Are you looking for a simplified AK grip & not wanting the storage compartment? Look no further than the BG-AKOE! #tangodown #ak #gunparts #gunowner #rifle #gunsdaily #guns #shootingsports #newproduct #retailtherapy

Examples of tango down

"FOX TWO SPLASH ONE, TANGO DOWN" I say to my cat as I send Chuck's latest and most problematic facebook post to HR
@theomimus, December 2018
Although Islamic State supporters have written their own programs to automatically block Anonymous usernames, they have not been able to stay hidden for long. With every Islamic State account that goes dark, hacktivists celebrate with a triumphant “Tango Down.”
E.T. Brooking, Foreign Policy, November 2015 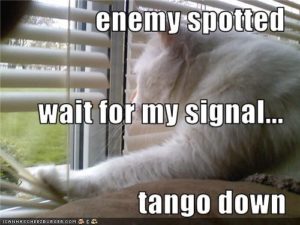 Who uses tango down?

You may encounter tango down if you’re on a special ops mission to take out a terrorist, but you’re more likely to hear it among gamers, especially in military-themed first-person shooters.

Using real military lingo, we gather, makes the experience more fun. Gamers, including professional ones, will proclaim tango down over voice chat to alert their fellow players of an enemy kill.

why do the ppl playing games at E3 conferences b talking like "tango down! tango down! i got ur 6!" like nigga nobody talks like that lmao

It can also be used any time someone overcomes an opponent, be it on a video game battlefied or on social media.

He has been eliminated boys, tango down. https://t.co/EXVCQadtTa

A variation of tango down, tango sucka became popular around 2009 in the gaming sphere. With its insulting sucka for “sucker” (fool), tango sucka is more taunting and gloating.

This is not meant to be a formal definition of tango down like most terms we define on Dictionary.com, but is rather an informal word summary that hopefully touches upon the key aspects of the meaning and usage of tango down that will help our users expand their word mastery.