Where does uckers come from? 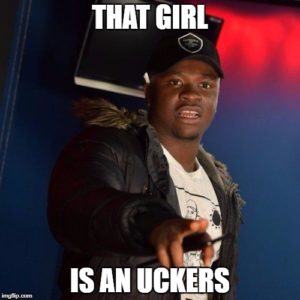 Uckers broke into popular media in the 2015 song “4 Door Coming” by British rappers, 410. 410 is a British gang based out of Brixton, London and central to a genre of music known as UK Drill. In the song, one person raps: “Tell a bitch keep her face down / Who ever told you we’re lovers? / Three balls on her tongue / Uckers, badders.”

Uck is Multicultural London English slang for oral sex (likely from suck or fuck or an imitation of the sound) and badders is London slang for a person who is sexually experienced. Uckers badders, then, is a woman practiced at the BJ.

Man I been round your girl she's an uckers badders

Performer Michael Dapaah, playing his comic rap character “Big Shaq,” further spread uckers in his a viral 2017 “Man’s Not Hot,” a satire of UK drill with nonsensical lyrics including math problems, gun sounds, the alphabet, and the line “that girl is a uckers.”

"I know a nice girl for you" / First of all, that girl is an uckers
@NasirBray, October 2017
I hope you all find love and that your significant other is an uckers
@noxiousnicole, December 2017 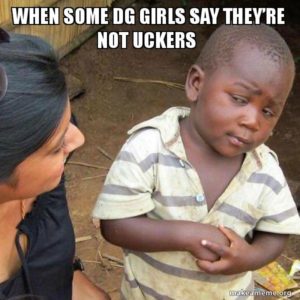 Uckers is often used in reference to its popularizer, Big Shaq.

see your gorl in the park, that gorl is an uckers pic.twitter.com/znVBCHajpB

She act like a uckers badders Buh she far from it 😒

This is not meant to be a formal definition of uckers like most terms we define on Dictionary.com, but is rather an informal word summary that hopefully touches upon the key aspects of the meaning and usage of uckers that will help our users expand their word mastery.