What is the Mu variant?

The Mu variant is a variant of the COVID-19 virus. Mu variant is the common name used to refer to what is technically known as the B.1.621 variant.

Mu is a Greek letter and can be pronounced myoo or moo.

A variant of a virus is a new strain that has emerged due to a mutation (or mutations) in the virus’s genetic structure.

The Mu variant was first recorded in South America.

Awareness of the Mu variant increased in the US in early September 2021 due to media reports of cases in the US and the labeling of the variant by the World Health Organization (WHO).

Where does Mu variant come from? 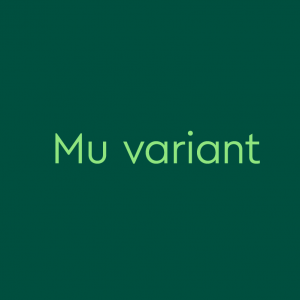 The Mu variant was first identified in Colombia by the WHO in January 2021. In the name Mu variant, the word mu refers to the 12th letter of the Greek alphabet. Greek letters have been used by the WHO in the naming of COVID-19 variants, including those named Alpha, Beta, Delta, and Lambda.

In September 2021, the WHO classified the Mu variant as a “Variant of Interest,” meaning its genetic changes could make it more severe and transmissible. At the time, the Mu variant was in the same category as the Lambda variant, a variant that began receiving media attention in the summer of 2021. The Delta variant, which was responsible for more than 90 percent of all U.S. COVID-19 cases by the fall of 2021, has the more serious classification of “Variant of Concern.”

The name Mu variant became more well known in the US beginning in the fall of 2021 as the name was used in media coverage of reported cases of the variant.

I spent time last night reading about the Mu variant. 2,000+ cases already here in a handful of states.
@IronSharky, September 4, 2021
Although the variant only accounts for less than one percent of all Covid-19 coronavirus samples that have been sequenced in California and the U.S., it’s clear that the Mu variant had entered the U.S. by the start of Summer.
Bruce Y. Lee, Forbes, September 5, 2021

The name Mu variant is the most common way to refer to the COVID-19 variant that’s technically known as B.1.621. This name is used by health experts and in media reports.

Scientists are warning that a new variant dubbed ‘Mu’ — already detected in Ontario — contains a set of mutations indicating it could be resistant to neutralizing antibodies arising from vaccination and infection. https://t.co/xu7K7h31X0

The first 3 cases of the Mu variant confirmed in South Korea, according to public health officials. They were brought in from people who traveled to South Korea from Mexico in May, U.S. in June, and Colombia in July.

I see we're now at the 'mu' variant. If nothing else the pandemic is improving my knowledge of ancient Greek.

This is not meant to be a formal definition of Mu variant like most terms we define on Dictionary.com, but is rather an informal word summary that hopefully touches upon the key aspects of the meaning and usage of Mu variant that will help our users expand their word mastery.