Vaccine hesitancy is unwillingness or refusal to accept a vaccine even when one is available.

Vaccine hesitancy is a general term that is used to refer both to people hesitant to take some specific vaccines as well as the so-called “antivaxxers” who refuse to take any vaccines at all. The media sometimes uses the term vaccine skepticism interchangeably with vaccine hesitancy.

Although the term vaccine hesitancy has been used in the medical field since around the late 2000s and early 2010s, it saw mainstream use during 2020 and 2021 when vaccine hesitancy toward the COVID-19 became a significant issue.

Where does vaccine hesitancy come from? 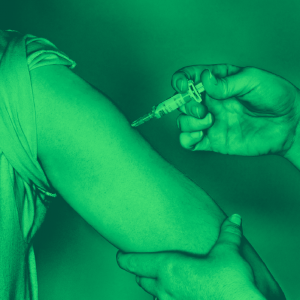 The definition of vaccine hesitancy that is most commonly used amongst scientists and health experts comes from a 2015 report from the Strategic Advisory Group of Experts on Immunization (SAGE). SAGE is a group of scientists that conducts research on behalf of the World Health Organization (WHO) and advises the WHO on strategy and technology. SAGE began officially researching vaccine hesitancy in 2012. SAGE actually considered other terms to use before settling on vaccine hesitancy.

The report attributes the cause of vaccine hesitancy to three major factors: complacency, confidence, and convenience.

In 2019, the WHO listed vaccine hesitancy as one of their 10 biggest threats to world health. While the WHO and other medical researchers might indirectly acknowledge antivaxxers, they are often considered to be a small part of the larger group that includes all vaccine-hesitant people. Experts are more concerned with the people “on the fence” about vaccines as they are much more likely to be convinced of the numerous benefits of vaccines.

Black patients' vaccine hesitancy often is rooted in well-founded mistrust of the health system, says the head of the Johns Hopkins Center for Health Equity. Breaking through it takes giving them "a sense of empowerment and control over their own health."
@NPR, January 19, 2021
The prime reason for vaccine hesitancy stated by healthcare professionals was “doubt regarding the duration of immunity from vaccination”. This means many are not sure for how long the vaccination will protect.
Syed Akbar, The Times of India, February 18, 202

At one time, vaccine hesitancy was mostly used by health experts and medical professionals. Since the COVID-19 pandemic, however, the term vaccine hesitancy has become widespread due to extensive use in the media.

Vaccine hesitancy within the Black community is not about ‘cultural differences’ but rather historical and institutional racism.

Trust is earned not given.

Our vaccine campaigns need to reflect this reality.

In Israel, vaccine hesitancy persists even in some surprising places, including medical staff at some hospitals. https://t.co/zJQGq4lZ2R

This is not meant to be a formal definition of vaccine hesitancy like most terms we define on Dictionary.com, but is rather an informal word summary that hopefully touches upon the key aspects of the meaning and usage of vaccine hesitancy that will help our users expand their word mastery.