Feedback
Previous What's In A Name: 18 Popular Brands Next Footnotes vs. Endnotes

The three words too, to, and two sound exactly alike but have three distinct usages! They are classic examples of what we refer to as homophones—words that are pronounced the same but have different meanings and spellings. They often end up in the wrong spot in written language as a result of an overeager spellcheck program on your phone. Let’s examine which one fits in the right spot.

What does too mean?

As an adverb, too is used to describe something that’s “in addition, furthermore, moreover.” It’s another way of saying “also” or “as well” but usually fits more naturally at the end of a sentence. For example, “If you’re getting ice cream, I want some too!”

Another correct usage would be in describing “an excessive extent or degree; beyond what is desirable, fitting, or right.” So, you might be “too sick to travel” or “too tired to go for a run.”

What does to mean?

Let’s go to Dictionary.com’s vast knowledge repository. As a preposition, to is used for “expressing motion or direction toward a point, person, place, or thing approached and reached (as opposed to from),” for example, “they came to the house.” Other uses include expressing direction or motion, a limit of movement or extension, expressing contact or continuity, and others. It can also be used as an adverb, as in “after he came to.”

What does two mean?

This should be the easiest of the trio—two is a numerical value, so it’s used accordingly (“the number after one and before three is two“). The definition also includes the phrasing in two, for when you’re separating something into halves. “I split the log in two.”

President Donald Trump’s official inauguration poster featured a nice big photo of the nation’s 45th president, and also included a rather glaring typo. Now, it starts off OK. “No dream is too big” it begins, and we’re all good so far. It’s the next two/too/to reference where the wheels fall off. The poster continues, “no challenge is to great. Nothing we want for the future is beyond our reach.” The Library of Congress website had the poster for sale before social media users discovered it, and the ad was taken down. 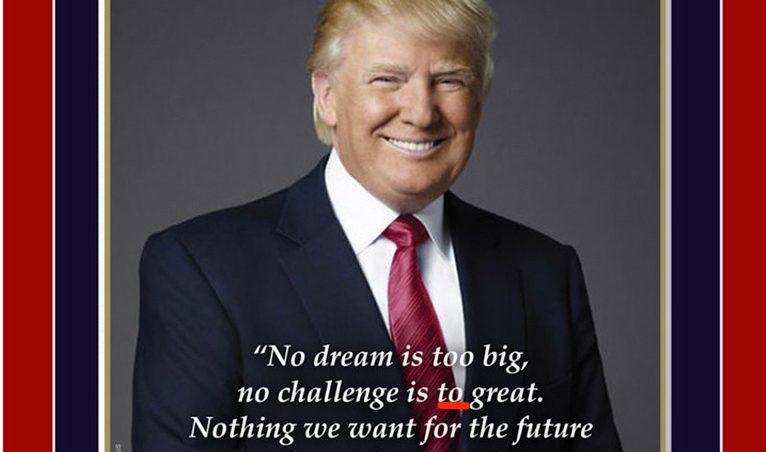 Previous What's In A Name: 18 Popular Brands Next Footnotes vs. Endnotes
RELATED POSTS