Feedback
Previous The Racist History of “Eenie, Meenie, Miney, Moe” Next Why Does A Cow Become Beef?

Searches for this futuristic term jumped 65% this week as news circulated that Justin Timberlake would be performing with a hologram of Prince during the Super Bowl halftime show.

Before game-day, it came out that Prince was not a fan of the technology, saying in 1998, “that whole virtual reality thing… it really is demonic. And I am not a demon.” 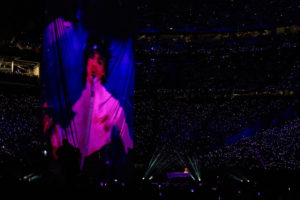 Ultimately, Timberlake went with a simple projection of the pop icon, rather than a full-blown hologram.

Continuing to support the theory that we all care way more about Super Bowl commercials than the actual game, searches for dilly spiked 291% this week. Used in a myriad of BudLight ads, dilly dilly became 2018’s Super Bowl meme. The term means “delightful or excellent.”

Searches for this term were up 315% this week, after President Trump asked if he could say not applauding him during the State of the Union Address was “treason.” FYI, refusal to clap for someone’s speech generally does not fall under the category of treason.

Treason: The offense of acting to overthrow one’s government or to harm or kill its sovereign.

This week, FiveThirtEight published a piece about how public opinion around the Russia investigation changed since the release of what will forever be known as the “Nunes memo.” The poll referenced in the article showed that “50 percent of Americans think Trump campaign officials colluded with Russia.” Or, a plurality.

President Trump is also to thank for this great word jumping 2,695% in searches this week. Meaning “boastful,” many were shocked when the President declared this term did not describe him.

Braggadocious = Boastful; speaking with exaggeration and excessive pride, especially about oneself. #Trumphttps://t.co/ijkyb3jYFT https://t.co/HXIpMXX1Vu

Previous The Racist History of “Eenie, Meenie, Miney, Moe” Next Why Does A Cow Become Beef?
RELATED POSTS