a text-based graphic overlay displayed at the bottom of a television screen or film frame, as closed captioning or the crawl of a newscast.

What is the origin of chyron?

Chyron is an altered spelling of earlier Chiron, the name of an electronic graphics platform developed by Systems Resource Corporation, later known as Chyron Corporation. In Greek mythology, Chiron is the name of a wise and beneficent centaur and teacher of Achilles, Asclepius, and others. Chyron entered English in the second half of the 20th century.

how is chyron used?

A good chyron demonstrates sound judgment, clarity, and wit. But the best chyrons are those that accompany segments that demonstrate the same things.

On television, scientists, journalists and chyrons keep warning us that the most important, civic-minded thing to do in the midst of the covid-19 pandemic is to stay away from other people.

Elahe Izadi , "Our TVs are full of characters spreading germs and now we can never unsee it," Washington Post, March 24, 2020

SYNONYM OF THE DAY
Double your word knowledge with the Synonym of the Day!
SEE TODAY'S SYNONYM
Load More
Apr 06 Jabberwocky
Apr 08 chyron
Word of the Day Calendar

the point in the orbit of a heavenly body, especially the moon, or of an artificial satellite at which it is nearest to the earth.

What is the origin of perigee?

Perigee, “the point in the orbit of a heavenly body, especially the moon or an artificial satellite, at which it is nearest to the earth,” comes via French périgée from the New Latin noun perigēum, perigaeum, from the Greek adjective perígeios, a term in Stoic philosophy meaning “surrounding the earth,” and as an astronomical term, “near the earth (e.g., the moon).” The noun plus adjective phrase perígeion semeîon (“sign, signal”) means “the perigee”; the phrase is also shortened to perígeion, a noun use of the neuter adjective. The Greek preposition and prefix perí, peri– means “around, surrounding”; the combining form  –geios is a derivative of the noun gê “earth.” Perigee entered English at the end of the 16th century. 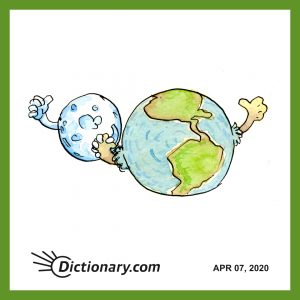 how is perigee used?

The phenomenon, in which a full moon appears at its closest point in its orbit around the Earth, known as perigee, is colloquially called a “supermoon.”

an example of writing or speech consisting of or containing meaningless words.

What is the origin of Jabberwocky?

Jabberwocky, “speech consisting of or containing meaningless words,” is a derivative of the name Jabberwock, a monster generally depicted as a dragon in a nonsense poem in Lewis Carroll’s Through the Looking Glass (1871). Concerning the etymology of Jabberwocky, Carroll himself wrote in a letter to students at Girls’ Latin School in Boston, Massachusetts (now Boston Latin Academy), “The Anglo-Saxon word wocer or wocor signifies ‘offspring or fruit.’ Taking jabber in its ordinary acceptation of ‘excited and voluble discussion,’ this would give the meaning of ‘the result of much excited and voluble discussion.’”

how is Jabberwocky used?

his face melts into a mask of sadness and despair, then sparkles with wit as he tells in a stream of jabberwocky the loopy story of a fop named Pongo Twistleton …

Of course all the White House’s latest jabberwocky about “benchmarks” and “milestones” and “timetables'”…  is nothing more than an election-year P.R. strategy …