Save This Word!
This shows grade level based on the word's complexity.
noun
a nut having two flat, widely projecting pieces such that it can be readily tightened with the thumb and forefinger.
QUIZ
SHALL WE PLAY A "SHALL" VS. "SHOULD" CHALLENGE?
Should you take this quiz on “shall” versus “should”? It should prove to be a quick challenge!
Question 1 of 6
Which form is used to state an obligation or duty someone has?
shall
should
TAKE THE QUIZ TO FIND OUT
Also called butterfly nut, thumbnut.

What does wing nut mean?

Wing nut is an insulting slang term for a person who’s considered eccentric or who has extreme political views.

In a completely different context, wing nut is also a term for a nut (a piece of usually metal hardware that attaches to a bolt) with two tabs on its sides that kind of look like wings. The “wings” make turning the nut by hand easier when it’s being attached to a bolt. It’s also called a butterfly nut (because of the “wings”) or a thumbnut (because it can be easily turned with the thumb and forefinger). 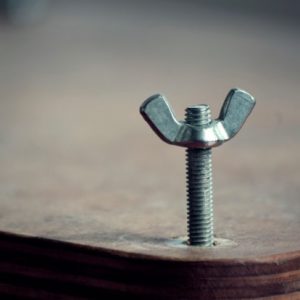 Both senses of the word can also be spelled wingnut and wing-nut.

The only connection between the two senses of the word is probably the word nut, which can be used to refer to a person considered eccentric (someone who is nutty). However, nut can also be used as a negative slang term for a person who is mentally ill, and wing nut can also imply this. Keep in mind that when used in this way, these terms may reinforce harmful stereotypes and associations with mental illness.

Example: Every local government meeting has a few wing nuts who show up to spout off conspiracy theories during the public comment session.

Where does wing nut come from?

In its political sense, wing nut is probably based on the use of the terms right-wing and left-wing in the discussion of polarized politics, especially in the U.S. A person considered to have an extreme ideology might be insultingly labeled a right-wing nut or a left-wing nut. Today, the term wing nut is often applied without specifying the “wing” being referred to, as in Commentators labeled the senator a wing nut for his extreme views on foreign policy. Use of wing nut in this way gained popularity in the late 1900s and early 2000s.

The term is also used outside of politics as a mostly negative term for oddballs or crackpots, as in I avoid reading the comments because it’s mostly trolls and wing nuts.

The wings on literal wing nuts make them easier to screw onto bolts with your fingers, but they also make it so that the nut can’t be tightened with tools like socket wrenches. For this reason, wing nuts are usually used in things that need to be quickly adjusted or frequently assembled or disassembled, but that do not require the connection to be as tight as it could be.

What are some other forms related to wing nut?

What are some synonyms for wing nut?

What are some words that share a root or word element with wing nut?

What are some words that often get used in discussing wing nut?

How is wing nut used in real life?

When it refers to extremists or eccentrics, wing nut is always used negatively, usually as a dismissive insult.

Could we use a wing nut with Loctite to secure the LJ Wing bottom headers for shipping?

Which of the following words is least likely to describe a person considered a wing nut?

How to use wing nut in a sentence