ACAB is a derogatory acronym that stands for All Cops Are Bastards and All Coppers Are Bastards, among other variants. Often used alongside ACAB is its numerical equivalent 1312, based on the letters’ alphabetical position (A is the 1st letter in the alphabet, etc.)

Cop and copper are slang terms for police officers that emerged in America in the 19th century. A bastard has long been used as a harsh insult for a “despicable person.”

ACAB has been used for decades, especially in the form of graffiti and other markings, by people who oppose the police for various reasons, from political anarchists to violent street gangs. Following the killing of George Floyd in 2020, ACAB was notably in the protests against police violence and racism.

BIPOC, cop, jump out boys, no face, no case

Where does ACAB come from? 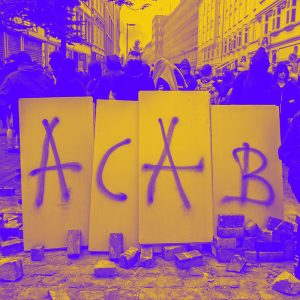 The acronym ACAB is found in UK slang in the 1970s, when it became a popular tattoo among prisoners and other people associated with criminal activity. ACAB originally stood for All Coppers Are Bastards; this full phrase has been recorded as early as the 1950s. The usual phrase in US slang, All Cops Are Bastards, has been found since the 1970s. The underlying reason behind calling all cops bastards—even if a person doesn’t literally think all officers are bad people—is that police forces are fundamentally oppressive.

ACAB gained greater notoriety in the 1980s thanks to the English Oi punk band the 4-Skins, who used it in their 1982 anti-police song “A.C.A.B.” Many people associated with Oi punk music are skinheads, a disaffected, rebellious subculture which, it’s important to bear in mind, has a racist, neo-Nazi faction also known to use ACAB as a hateful slogan.

Since the 1970-80s, ACAB has been used by many other groups around the world in opposition to police forces and other powerful institutions they consider oppressive in some way. During the 2010–12 Arab Spring, for instance, some Egyptian graffiti artists tagged buildings with ACAB in demonstrations against authoritarian regimes. And modern-day anarchists may use ACAB as a nonviolent, if aggressive or mocking, expression of their antiestablishment beliefs.

ACAB, and its coded numerical counterpart 1312, came into mainstream attention in 2020 amid protests for racial justice spurred by the killing of George Floyd involving police officers. On social media, in articles and other online content, on signs during protests, and in graffiti resulting from some more destructive activity surrounding the demonstrations, ACAB and the hashtag #ACAB were used in various degrees of condemnation of police forces for systemic racism and violence against Black people.

acab is universal, police brutality isnt an “american” problem, if you think the police in your country is different its because you are privileged and uneducated [sic]
@LOVERHOBl, May 29, 2020
Protesters spray-painted surrounding buildings with graffiti reading "Say His Name" and "ACAB"—an abbreviation for "All cops are bastards."
Aaron Mesh and Alex Wittwer, Willamette Week, May 29, 2020

ACAB is used around the world by a diverse group of people for a wide range of political purposes and intents. Some groups, such as racist skinheads, may use ACAB as a part of violent actions to abolish the police in favor of a far-right worldview. Other groups, such as some Black Lives Matter activists, may use ACAB as a rallying cry to peacefully reform systems that kill and keep down Black people.

#Catalonia today is showing the world the lie that is "liberal democracy" and "freedom."

The state will always be a violent oppressor when the people decide something for themselves.#Anarchy #Freedom #ACAB

george floyd lost his life for the colour of his skin. that cop only lost his job because of privilege not punishment. hes a murderer. #ACAB

The cops are starting the violence. Pass it on. #ACAB

This is not meant to be a formal definition of ACAB like most terms we define on Dictionary.com, but is rather an informal word summary that hopefully touches upon the key aspects of the meaning and usage of ACAB that will help our users expand their word mastery.