The Diya Lamp emoji 🪔 depicts a diya, a type of lamp that is commonly used in homes in India. Diyas are used by Indians for a wide range of reasons, such as for ceremonial rituals or religious observances. In particular, a large number of diyas are made and lit during Diwali, an event also known as the Festival of Lights that is celebrated during October or November by the different religious groups living in India.

As a result, the Diya Lamp emoji 🪔 is often used during Diwali by Indian social media users to celebrate the holiday. In 2021, Diwali occurred from November 2 to November 6, with the main celebration occurring on November 4.

Dispel the darkness with light as you learn about Diwali—one of the biggest festivals in India—from its significance to the best ways to celebrate!

Where does 🪔 Diya Lamp emoji come from? 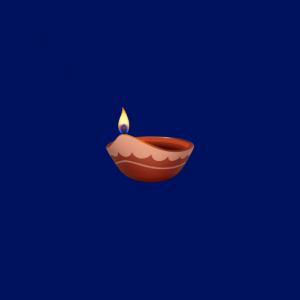 The Diya Lamp emoji 🪔 was approved under Unicode 12.0 in 2019. On most major platforms, the emoji depicts a brown diya filled with oil and a lit candle wick. Depending on the platform, the depiction of the diya is either realistic or stylized. The Apple and Microsoft versions of the emoji have the lamp’s lit candle positioned on the left, while most other major platforms depict the candle on the right. The Twitter version of the emoji depicts a red lamp instead of a brown lamp.

While diyas are often used by many Indians throughout the year, they are an important part of the celebration of Diwali. During this time, many diyas are crafted and lit as part of both religious and secular celebrations of the holiday, especially on the dark night of the new moon.

Happy Diwali to you and your family. May you be the shining light who illuminates everything. Lots of love, good health and happiness to all. 🪔
@sangeetabijlani, November 14, 2020
Many people from the Indian diaspora community in The Netherlands are Celebrating #BhoomiPujan today. We are going to light a diya 🪔 and pray for an inclusive and more harmonious world. #JaiSiyaRam 🙏☀️🙏
@Mahesvari_, August 5, 2020

The Diya Lamp emoji 🪔 is most commonly used by Indian social media users, who are more likely to be familiar with diyas.

Brightness of Diyas will defeat the Darkness of Coronavirus.

We will win this battle! 🙏#9pm9minute #IndiaFightsCorona

Everyone is advised not to use alcohol based sanitizers while lighting diyas 🪔 and candles🕯tomorrow at 9 PM as it is inflammable.#IndiaFightsCorona #COVID19 #StayHomeStaySafe

In particular, use of the Diya Lamp emoji 🪔 significantly increases during the celebration of Diwali in October or November.

May the festival of joy become more beautiful for you and family. All your new ventures get success and progress. HAPPY DIWALI 🪔

May the divine light of diwali spread into your life with peace, prosperity, happiness and good health. Wishing you all a very Happy Deepavali 🪔

This is not meant to be a formal definition of 🪔 Diya Lamp emoji like most terms we define on Dictionary.com, but is rather an informal word summary that hopefully touches upon the key aspects of the meaning and usage of 🪔 Diya Lamp emoji that will help our users expand their word mastery.