The Dog emoji 🐕 depicts a dog, the world’s most popular pet. It is commonly used to represent dogs, puppies, and pets in general. It also appears alongside the many dog-based metaphors and idioms that are commonly used. This emoji is frequently used alongside the Dog Face emoji 🐶.

So your dog hops to attention when you use the word “treat,” but is it accurate to say that animals use language?

Where does 🐕 Dog emoji come from? 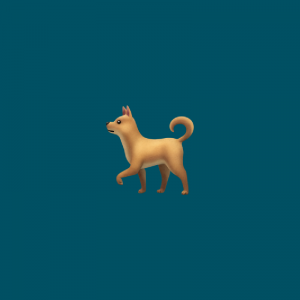 The Dog emoji 🐕 was approved under Unicode 6.0 in 2010. On most major platforms, the emoji resembles a dog of varying breed with a curled tail facing to the left. Depending on the platform, the dog may be realistic or stylized. The Google and WhatsApp versions of the emoji have the dog turned slightly facing the viewer. The Apple and Facebook version of the emoji appear to depict a brown-furred Shiba Inu, the dog breed used in the popular Doge meme, which inspired Dogecoin.

Dogs are the most popular pet in the world, which means the Dog emoji 🐕 is an incredibly common and versatile emoji. It largely overlaps in use with the Dog Face emoji 🐶 and the two emoji are often used together. Both emoji are often used in figures of speech and idioms that reference dogs (such as treat someone like a dog or You can’t teach an old dog new tricks).

The Dog emoji 🐕 is a very popular emoji that is used to refer to man’s best friend.

I don’t deserve my dog. Luckily, he thinks that I do. 🐕‍🦺

The Dog emoji 🐕 is also commonly used with figures of speech that involve dogs.

This is not meant to be a formal definition of 🐕 Dog emoji like most terms we define on Dictionary.com, but is rather an informal word summary that hopefully touches upon the key aspects of the meaning and usage of 🐕 Dog emoji that will help our users expand their word mastery.