The Dog Face emoji 🐶 depicts the face of a dog, the world’s most popular pet. It is commonly used to refer to dogs, puppies, dog-based idioms and metaphors, and pets in general. It is frequently used alongside the Dog emoji 🐕.

The Dog Face emoji 🐶 is often  used with the hashtag #NationalDogDay on August 26, which is National Dog Day and during the Westminster Kennel Club Dog Show, commonly called the Westminster Dog Show, usually held in February each year (June 12–13 in 2021).

Why is the word dog one of the great mysteries of the English language? Fetch the answer here!

Where does 🐶 Dog Face emoji come from? 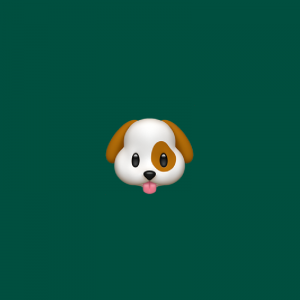 The Dog Face emoji 🐶, also popularly called Dog emoji despite the fact there actually is a Dog emoji 🐕, was approved under Unicode 6.0 in 2010. On most major platforms, the emoji portrays the stylized face of a dog sticking its tongue out as viewed from the front. The coloration and breed of the dog varies by platform. On Facebook, the emoji displays a more realistic depiction of a Shiba Inu, the dog breed used in the popular Doge meme, which inspired Dogecoin. The Google, Samsung, WhatsApp, Twitter, and Facebook versions of the emoji appear to use the same dog that is depicted in each platform’s version of the Dog emoji 🐕.

Dogs are incredibly popular animals and so the Dog Face emoji 🐶 and Dog emoji 🐕 are used every single day, often together. These two emoji are used to refer to real and fictional dogs and puppies of all breeds, and may be accompanied by cute photos of dogs.

Like the Dog emoji 🐕, the Dog Face emoji 🐶 is also used to metaphorically refer to dogs when using common idiomatic expressions such as Every dog has its day and You can’t teach an old dog new tricks.

The Dog Face emoji 🐶 is used to refer to real and fictional dogs.

Mutley reminds me of Snoopy 🐶 Just noticed two wooden soldiers for the first time on the ice! #MariahsMagicalChristmas

The Dog Face emoji 🐶 is also used to metaphorically refer to dogs.

This lockdown I've started to learn to play the piano. 30 minutes day and I'm amazed how much I've learned already..so apparently you can teach an old dog new tricks 🎹🎼🐶

This is not meant to be a formal definition of 🐶 Dog Face emoji like most terms we define on Dictionary.com, but is rather an informal word summary that hopefully touches upon the key aspects of the meaning and usage of 🐶 Dog Face emoji that will help our users expand their word mastery.