When you live in the Caribbean with a flamingo called Bob 🦩
@bbcworldservice, February, 2019
Better make room on your half-term itinerary because we're opening for a brand new season on the 16th February! It's going to be as fabulous as a flamboyance of flamingos 🦩 ...
@Longleat, February, 2019
In case u don't know that Flamingo feathers are tinged a beautiful rose pink colour due to coloured materials called carotenoids in the tiny shrimps that they feed on. If they do not eat the shrimps, their feathers turn pale  🦩
@AISHHA_B, March, 2019 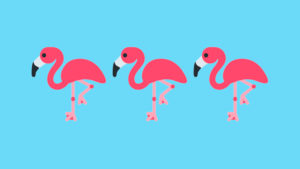 Flamingos are beautiful wading birds found in the tropical Americas, with two species found in Africa, Asia, and Europe. Their distinctive pink hue comes from the bacteria and beta-carotene they get from the food they eat, including shrimp. The brighter the flamingo, the healthier the bird.

The name flamingo entered into English in the 1560s. It comes from Spanish and Portuguese names for the bird, flamengo. The names are ultimately rooted in the Latin flama (“flame”), though it’s traditionally said to be in reference to the Flemings, a people in modern-day Belgium historically known for their ruddy complexion, apparently.

As might be expected, the flamingo emoji 🦩 depicts the pink, long-necked bird. Added in 2019 under Unicode 12.0, current versions show the flamingo standing with one leg tucked up, as is its habit (although biologists don’t completely understand why the birds do this). On unsupported platforms, the emoji may display as an empty box. 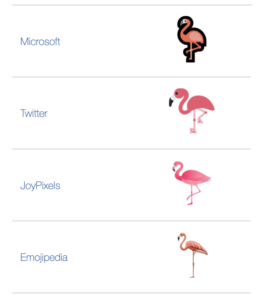 Obviously, people use the flamingo emoji to represent flamingos, real …

Take a walk on the wild side with Oddfellows! Perfect for Easter holiday breaks with the family you'll enjoy an overnight stay in one of our stunning apartments and get queue jump tickets for the world famous Chester Zoo. To book – https://t.co/N4M5tUnaQr 🦩 pic.twitter.com/UTAG7bC0G8

Have you visited our pool yet? If not, you're missing out! 🏊 🦩 We have fun floats and seating in the sun, shade, water and poolside so you can stay comfortable. Visit our website to learn more about our amenities: https://t.co/OrYtGOrRlT pic.twitter.com/Wg49MQUV0Z

Pictures of items with flamingos on them, from cakes to t-shirts, may also be illustrated with the flamingo emoji on social media.

For my money, one of the best logos in American soccer.

As the flamingo emoji becomes more widely available, expect to see the flamingo emoji in posts about trips to tropical locations, particularly Florida—which is known for its flamingos. The tropics are also associated with heat and vacations, so expect the flamingo emoji to take flight in those contexts as well. And, things might might just get campy with it.