The Menorah emoji 🕎 depicts a menorah, a type of candelabra used to celebrate the Jewish holiday of Hanukkah. It is commonly used to refer to the religion of Judaism, Jewish people, or Hanukkah. Jewish social media users will often use this emoji alongside other emoji, such as the Star of David emoji ✡️, to proudly identify themselves.

The Menorah emoji 🕎 sees significant usage leading up to and during the Jewish festival of Hanukkah. According to the Jewish calendar, Hanukkah begins on the 25th of Kislev and ends on the 2nd of Tevet. In 2021, Hanukkah began on November 28.

Dedicate some time to learn about the Jewish holiday of Hanukkah, its origin, and the traditions that make it a reflective and joyous time.

Where does 🕎 Menorah emoji come from? 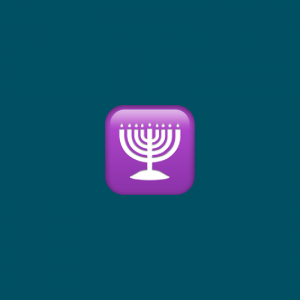 The Menorah emoji 🕎 was approved as Menorah with Nine Branches under Unicode 8.0 in 2015. On all major platforms, the emoji depicts an all-white illustration of a completely lit menorah drawn on a purple square with rounded corners.

The menorah is widely recognized as a symbol of Judaism and Hanukkah, even by non-Jewish people. As a result, the Menorah emoji 🕎 is commonly used to refer to Judaism or to wish people a happy Hanukkah. Hanukkah occurs yearly sometime in November or December, so the Menorah emoji 🕎 sees increased usage every year during this time.

The Menorah emoji 🕎 is used to refer to Judaism and Hanukkah. Specifically, Jewish people often use it to identify themselves or to celebrate Hanukkah.

To all my Jewish brothers & sisters HAPPY HANUKKAH 🕎!!!

Happy Hanukkah to my fellow Jews 🕎🎁🎉

This is not meant to be a formal definition of 🕎 Menorah emoji like most terms we define on Dictionary.com, but is rather an informal word summary that hopefully touches upon the key aspects of the meaning and usage of 🕎 Menorah emoji that will help our users expand their word mastery.