What does 🧟 Zombie emoji mean?

The Zombie emoji 🧟 depicts a classic zombie with decaying gray or green skin with its arms extended and fingers splayed, as if lurching toward the viewer.

The emoji is commonly used in the context of zombies that appear in various works of popular culture.

Where does 🧟 Zombie emoji come from? 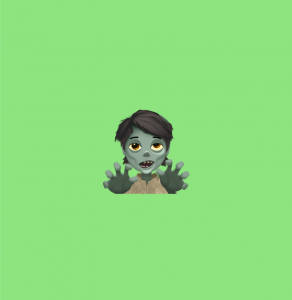 The Zombie emoji 🧟 was approved under Unicode 10.0 in 2017. On most major platforms, the emoji resembles a partially decomposed zombie with gray or green skin, often with blank eyes.

The zombie has disheveled hair and wears a usually tattered shirt, the colors of both of which vary across platforms. While it displays as gender-inclusive, the Zombie emoji 🧟 has male and female options and, on Microsoft, a variety of skin tones are available.

The Zombie emoji 🧟 was originally proposed alongside a slew of other fantasy creatures that included a werewolf, vampire, and fairy. The fairy and zombie are also now represented as emoji: Vampire 🧛 and Fairy 🧚.

Zombies appear throughout popular culture, and so the Zombie emoji 🧟 is very much … alive in digital communication.

The Zombie emoji 🧟 is especially used in the context of popular franchises that feature zombies or other undead beings, such as The Walking Dead, Game of Thrones, and the video game Plants vs. Zombies. The Zombie emoji 🧟 is also likely to shuffle out of its keyboard grave during the month of October leading up to Halloween.

who down to watch The Walking Dead w me?🧟‍♂️

Zombie emoji 🧟 is sometimes used metaphorically when a person feels exhausted or braindead—like a zombie.

Lots of nightmares last night messed up my sleep and have had me walking in some kind of fog all day.
🧟‍♀️

This is not meant to be a formal definition of 🧟 Zombie emoji like most terms we define on Dictionary.com, but is rather an informal word summary that hopefully touches upon the key aspects of the meaning and usage of 🧟 Zombie emoji that will help our users expand their word mastery.