Feedback
Previous "Street Art" vs. "Graffiti": What's The Difference? Next “Hispanic” vs. “Latino”: When To Use Each Term

This September, we released our biggest update to the dictionary ever. Our dictionary editors touched over 15,000 entries in a sweeping effort to reflect the many ways language is evolving. From capitalizing Black to adding a separate entry for Pride to revising references to suicide, our update addresses topics that touch us on some of our most personal levels: race and ethnicity, gender and sexuality, health and wellness.

Among the 15,000 entries we’ve updated are 650 brand-new ones, six of which have been especially introduced due to the experience of air travel in recent years:

Want to know what other words we added to the dictionary? Check out our in-depth article breaking down the big update.

On planes and in airports, these animals have become more prominent—and sometimes controversial. Their names, as they’ve spread into our lexicon, also often get used interchangeably in everything from newspaper headlines to casual conversations. But their differences matter.

Domesticated animals enrich our lives and contribute to our general happiness, but the specific physical, emotional, and cognitive benefits they can provide—as well as the training, legal status, and scope of work they have therein—varies.

Thirty years after the passage of the Americans with Disabilities Act (ADA), we think it’s more vital than ever to take the time to explain what makes each of these animals unique and what sets them apart. As their similarities and differences can be subtle, we’ve provided this chart to help you keep track. 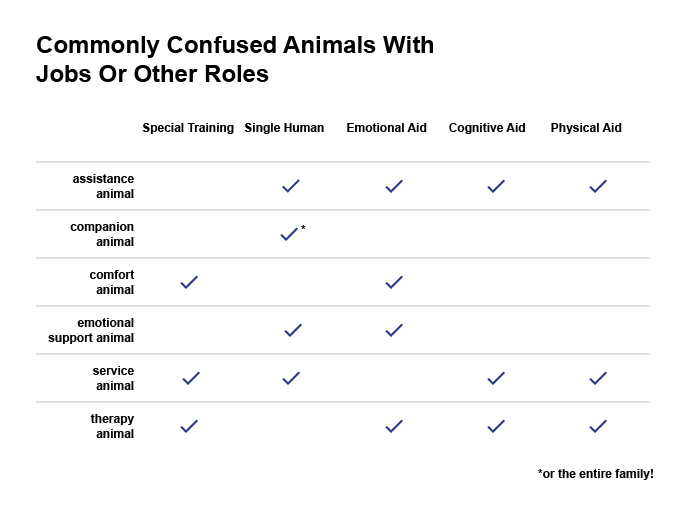 Differentiating the characteristics of commonly confused animals that serve humans

Speaking of the ADA, let’s dive in with the animal that is specifically protected under this landmark legislation: service animal.

What is a service animal?

A service animal is “an animal that is specially trained and able to provide assistance to a person living with a disability.”

In the US, service animals are legally protected under the Americans with Disabilities Act, which is enforced by the Department of Justice (DOJ). The ADA also specifically requires the work that the animal is trained to do to be directly related to the person’s disability. Specific details about the laws and regulations about service animals in the ADA can be found here.

Of the six animals we discuss here, service animals have the greatest legal protection, and federal law demands that a business or company allow service animals to be with their owners except for a few very specific conditions. Under the law, service animals are only owned by persons with disabilities or the animal’s trainer(s). If the animal is owned by a person without a disability, it falls under a different category and is not protected under the ADA.

Some common examples of service animals include:

According to US federal law, only dogs—and, rarely, miniature horses—are legally considered service animals. However, the ADA does allow for state and local laws to have a broader definition of which animals can qualify as service animals. This allowance has led to some rather unexpected animals being trained as service animals, such as parrots, pigs, and even capuchin monkeys.

What is an emotional support animal?

An emotional support animal is “an animal that provides a therapeutic benefit to a person diagnosed with a psychological disorder, as anxiety, depression, or PTSD, and that is allowed to accompany the person in certain public places where pets are not allowed, as the cabin of an airplane.”

Legally, emotional support animals (or ESAs, for short) enjoy less specific legal protection than service animals. Unlike service animals, ESAs do not have special training requirements and can be owned even by persons without disabilities, and so the ADA does not grant them legal protection. However, ESAs can be taken on airlines that normally do not allow pets thanks to the Air Carrier Access Act, which is enforced by the Department of Transportation (DOT).

Unlike service animals, ESAs require certification and a letter from a licensed therapist. Airlines can (and usually will) require this documentation before an animal can be taken on an airplane. When in doubt, it is best to consult the DOT’s web site or the regulations of the specific airline when deciding if and how to bring an ESA on an airplane.

While instances of people attempting to take advantage of the system to bring unusual animals (or their pet) on an airplane often make the news, most emotional support animals are simply dogs or cats that provide the emotional comfort needed by their owners.

What is a companion animal?

A companion animal is “any domesticated or tamed animal that is kept as a companion and cared for affectionately.” But you are most likely familiar with this animal by its more common name: a pet.

While pets may not have much legal protection, they still provide many benefits such as affection, love, and companionship. However, most pets have no special training and are not used as working animals or in clinical settings.

What is a therapy animal?

A therapy animal is “an animal trained to play a role in a physical or emotional therapeutic treatment plan, as a horse helping a rider develop muscle tone or a dog providing cognitive engagement for nursing home residents.”

Therapy animals are typically trained and owned by private owners or companies, who take them to hospitals or medical providers. As you can see in our chart, therapy animals can be trained to perform a variety of roles. An organization that requires a therapy animal will research one that best fits their needs and will come to a decision with the animal’s owner. As you can see, the same therapy animal travels to multiple places and serves many communities, depending on need.

Therapy animals do not legally have special rights or protections compared to a pet. However, therapy animals are trained and registered before they are used for medicinal or therapy purposes. Rather than satisfying any legal requirement, it is instead done for liability reasons so that a hospital has assurance that the animal is safe to be around patients as well as so that the animal’s handler will have some protection from civil lawsuits filed by a client.

Some of the most common examples of therapy animals are therapy dogs and cats that provide emotional support to persons in nursing homes or therapy horses used for therapy riding. However, unexpected animals such as snakes and other reptiles have also been used as therapy animals; that’s because caring for them requires concentration and focus that will distract a person from emotional or physical difficulties.

What is a comfort animal?

A comfort animal is “a therapy animal, usually a dog, that is specially trained to provide comforting companionship and an emotional release for victims of a crisis or disaster.”

Comfort animal is a term sometimes used for what are commonly known as crisis response animals. These animals are trained to interact with and comfort people who have been through traumatic events such as a war or natural disasters. As is reflected in our chart, these animals are only specifically trained to provide emotional support.

Legally, comfort animals are treated the same as pets and have no special rights or privileges. However, these animals do require training and certification for the same reasons that therapy animals do: without proper training, they cannot be necessarily considered safe to be around people going through trauma or a crisis.

While any animal could be a crisis response animal, dogs are once again far and away the most common animal used due to ease of training. These animals are usually not trained to perform any specific task but are trained to be able to quickly provide comfort or emotional support to persons who survived or are in the middle of a crisis.

What is an assistance animal?

An assistance animal is “an animal that is able to provide physical or emotional assistance to a person living with a disability, as alerting a deaf person to the sound of a doorbell.”

The only legal requirement for an animal to be an assistance animal is paperwork from a doctor or therapist. In theory, this means any animal could be an assistance animal for any reason. In practice, however, a housing provider has the right to refuse an obviously fraudulent request and a medical professional is equally unlikely to approve such a request.

Thus, assistance animals are usually conventional animals such as dogs, cats, or even birds. These animals must perform a task or serve a purpose that a landlord would reasonably accept as being an assistance the needs of a person with a disability. For example, a cat that reduces the frequency of a person’s stress-induced pain or a bird that alerts an owner with hearing impairments of visitors would be protected under federal law.

Essential to humans in different ways

Many of the animals we’ve discussed here indeed have similar roles—so much so that their names get used interchangeably. But their differences are so important that some of the animals are protected under federal law. And while their specific jobs and benefits vary, service animals, emotional support animals, therapy animals, and their kin all have one thing in common: they are essential to human lives.

Find out how some of our beloved animal companions got their names in our article about where the names for our pets come from.

Previous "Street Art" vs. "Graffiti": What's The Difference? Next “Hispanic” vs. “Latino”: When To Use Each Term
RELATED POSTS