Everything After Z by Dictionary.com
Previous Word assless chaps
Next Word blorange

What does Beautyblender mean?

A Beautyblender is a teardrop-shaped sponge that’s used to apply makeup. It is a Registered name.

The original Beautyblender came in pink and it has since expanded to include vibrant, limited-edition shades (called Pop!) because pink is great, but orange is straight fire

Actually soul destroying seeing how much foundation comes out of your beauty blender when it's washed, literally money down the drain
@lynsey_pearson, May 18, 2017
The key to applying makeup with the Beauty Blender is using a bouncing or stippling motion instead of a wiping or sweeping motion.
Miki Hayes, “How To Use A Beauty Blender In 5 Simple Steps To Get Flawless-Looking Foundation,” Bustle (November 27, 2015)
We should know all of the Beautyblender facts backwards, forwards, and inside out by now, since the revolutionary makeup sponge slash applicator is a seven-time winner of [Allure’s] annual Best of Beauty Awards.
Deanna Pai, “7 Surprising Beautyblender Facts You Won't Believe,” Allure (December 27, 2016)
SEE MORE EXAMPLES

Where does Beautyblender come from? 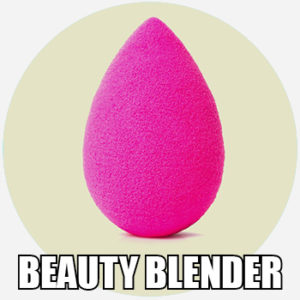 The Beautyblender was invented in 2002 by makeup artist Rea Ann Silva. At the time, she was working on the set of a TV show called Girlfriends, and would hand-cut the edges off of disposable sponges that were traditionally used to apply stage makeup. By using edgeless sponges, Silva was able to achieve a natural, flawless finish that translated well on high-definition TV, but hand-cutting disposable sponges to do this was time-consuming.

In 2003, Silva, in conjunction with fellow makeup artist Veronica Lorenz, began producing and selling Beautyblenders, which use a higher-quality material than the disposable sponges that inspired this product, on a small scale. Because her network was mostly made up of Hollywood makeup artists and stars, the product quickly caught on among high profile celebrities.

The Beautyblender first hit store shelves in 2007, and since then has become one of the bestselling beauty tools of all time.

Notably, the Beautyblender was trademarked (stylized as beautyblender) in April 2015. In March 2016, the company settled a copyright infringement case against Avon, who was selling a pink, teardrop-shaped makeup sponge they called the “Beauty Blender.”

Beautyblender is kind of like Kleenex or Band-Aid in that it’s a brand name that’s become the de-facto name for products of its kind, often called a genericized trademark. While plenty of other companies also sell similar makeup sponge applicators, only Beautyblender (the company) has actual rights to that name.

Nonetheless, the tool is now so ubiquitous that plenty of people just call their teardrop makeup sponges “beauty blenders”, whether or not they’re brand-name.

What, you don’t make art out of your makeup sponges? 🎨
. . .
You’re staring at @beautyblender 👀💖#OddlySatisfyinghttps://t.co/f2oTLP1dKd pic.twitter.com/Pg0CqtVmgm

This is not meant to be a formal definition of Beautyblender like most terms we define on Dictionary.com, but is rather an informal word summary that hopefully touches upon the key aspects of the meaning and usage of Beautyblender that will help our users expand their word mastery.