Who is Inigo Montoya?

Inigo Montoya is a character in The Princess Bride, a 1973 novel written by William Goldman and a 1987 film directed by Rob Reiner. Inigo Montoya is a Spanish-born swordsman who, through years of revenge-fueled study, becomes one of the top two swordsmen in the world.

Where does Inigo Montoya come from? 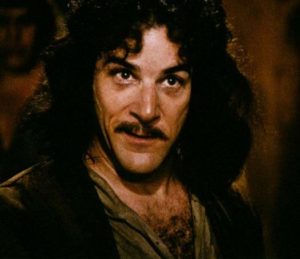 In both the book and the film, Inigo Montoya is a Spanish fencer whose father–himself a famous swordsmith–was slain by a six-fingered man when Inigo was a child. Inigo devotes himself to the study of fencing to avenge his father, ultimately becoming the only living person (to his knowledge) to achieve the top swordsmanship ranking of Wizard. Wizard is a fictional ranking, one rank above the highest non-fictional ranking of Master. He tells characters throughout the story that when he meets the six-fingered man who killed his father, he will say, “Hello. My name is Inigo Montoya. You killed my father, prepare to die.”

Mandy Patinkin (who portrayed Inigo Montoya in the 1987 film adaptation) told NPR in 2017 that though the film wasn’t initially a great success, and that its popularity has grown over time so much so that fans regularly approach him and ask him to repeat his famous lines.

Many of Inigo Montoya’s lines have been modified by fans to reflect their personal experiences and observations (for example, in reference to topics ranging from golf balls to US politics).

Hello 2018
My name is Inigo Montoya!
You killed my @Mariners…
Prepare to Die pic.twitter.com/AWdS8pOFHu

My name is Inigo Montoya. You drank my coffee. Prepare to die.
A Mug To Keep™
#UnnecessaryConfessions I killed Inigo Montoya's father
@randilynisin, March 2017
"Hello, my name is Oberyn Martell. You raped her, you murdered her, you killed her children. Prepare to die," Oberyn said.
Michelle Jaworski, “Here’s the Viper-Mountain fight reimagined as ‘The Princess Bride’,” The Daily Dot, June 2014
SEE MORE EXAMPLES

The face of Inigo Montoya and his famous line delivered to his father’s killer have appeared on unofficial merchandise spanning t-shirts and posters for years.

guys pbalfe just sent me a picture of his inigo montoya shirt this is the best day ever #pbalfesclass pic.twitter.com/PtAxGwxDSL

In particular, many popular designs incorporate the classic red “Hello, my name is” stickers. One such shirt caused controversy in 2013 when an Australian airline passenger wearing the “Hello, my name is” t-shirt was asked by a Qantas flight attendant–unsuccessfully–to remove it as it was unnerving to other passengers. 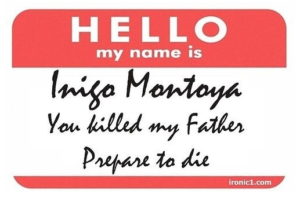 During the lead-up to the 2016 US presidential election, Senator Ted Cruz often quoted the famous line on the campaign trail. The Texas senator said that The Princess Bride was his long-standing favorite movie, and he drew a connection between Montoya’s revenge storyline and his own remarks that “We will carpet-bomb [the Islamic State] into oblivion.” Patinkin said he took issue with Cruz’s selective use of Inigo Montoya’s lines from the movie, asking the senator to instead remember Montoya’s final line, a warning against the destructive power of revenge: “I have been in the revenge business so long, now that it’s over, I don’t know what to do with the rest of my life.”

This is not meant to be a formal definition of Inigo Montoya like most terms we define on Dictionary.com, but is rather an informal word summary that hopefully touches upon the key aspects of the meaning and usage of Inigo Montoya that will help our users expand their word mastery.