Everything After Z by Dictionary.com
Previous Word: fall of the Berlin W...
Next Word: Lunar New Year

SENEGAL WON ON JUNETEENTH CANCEL EVERYTHING
@ClintSmithIII, June 2018
For many African Americans, it's even more significant than Independence Day. Here’s why we should make Juneteenth a national holiday.
@blackvoices, June 2018
On #Juneteenth, we celebrate emancipation and remember the long struggle for freedom. The slaves in Galveston were not told they were free until 2 yrs after Lincoln’s Emancipation Proclamation. More than 150 yrs later, our work is far from finished to achieve equality for all.
@KamalaHarris, June 2018

Where does Juneteenth come from? 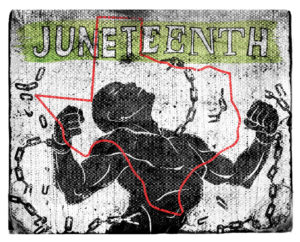 On June 19th, 1865 in Galveston, Texas, Union soldiers proclaimed that the Civil War had ended (after General Lee’s surrender and the North won). They also announced that anyone enslaved was now emancipated and slavery was abolished. General Gordon Granger read aloud the following message (from the Texas State Library and Archives Commission):

The people of Texas are informed that, in accordance with a proclamation from the Executive of the United States, all slaves are free. This involves an absolute equality of personal rights and rights of property between former masters and slaves, and the connection heretofore existing between them becomes that between employer and hired labor. The freedmen are advised to remain quietly at their present homes and work for wages. They are informed that they will not be allowed to collect at military posts and that they will not be supported in idleness either there or elsewhere.

This was two years after Abraham Lincoln issued the Emancipation Proclamation, which freed slaves in Confederate states, which included Texas. June 19th is historical and has since been celebrated as Freedom or Emancipation Day because it was the day the last of the slaves became aware of their freedom.

But, why the two-year delay in giving slaves their freedom in Texas? A number of explanations have been put forth, ranging from a messenger delivering the news getting shot to, far more cruelly, the news being deliberately withheld so slave owners could get one more cotton harvest.

The likely story is that there weren’t that many Union troops in Texas to enforce Lincoln’s proclamation. Whatever the reason, the delay was outrageous.

So, what did the newly freed African Americans do after June 19th, 1865? A lot of them moved North, because the North represented freedom and opportunity as well as because many of their owners weren’t keen on granting them their freedom.

The following year, they celebrated this date, and their descendants continued to celebrate it. The term Juneteenth is a portmanteau or a blend of the words June and nineteen, and it is evidenced in the record by 1890 in Galveston’s Daily News.

Celebrations consist of prayer, gathering, singing and dancing, and, for some, an annual pilgrimage back to Galveston, Texas. Guest speakers may present at bigger events held on the day and they usually focus on education and self-improvement as well as prayer.

Festivities notably include rodeos and baseball. Many foods and drinks are red in color (e.g., strawberry soda, barbecue, and red velvet cake). Red is said to represent the blood shed by slaves and has also been connected to symbolism of the color in Western Africa, where many slaves were taken from.

Juneteenth even has its own flag, which draws on the American and Texas flag. 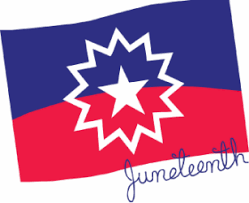 On January 1st, 1980, Texas declared Juneteenth an official state holiday. It has since become a much more recognized holiday as more and more states and institutions (such as the Smithsonian) provide celebrations on the date. Juneteenth organizers use the occasion to promote knowledge and appreciation of African American history and culture.

More people are becoming aware of Juneteenth and what it represents for both Black Americans and the US as a whole. It is a historical day, and people use the term to reflect on the US’s not-so-respectable past while also celebrating the great achievements and impact of culture in the US now. It’s also a day to think about how far we still have to go in achieving racial equality in the US.

🎵 We built this 🎵 #Juneteenth pic.twitter.com/fJYjUxIRYL

The sitcom Black-ish notably aired an episode entitled “Juneteenth” as their Season 4 premiere in 2017 (the plot elevates Juneteenth as a Black holiday), and that is just the beginning of more of Juneteenth conversations and dialogue in the media.