Onam is a 10-day Hindu harvest festival that culminates with a feast.

Onam is celebrated by Hindu people all over the world, but the festival originated with the Malayali people in the Kerala region of India. Onam is primarily a Hindu festival, but it’s sometimes observed as a cultural event by other Indians who are not Hindu.

Where does Onam come from? 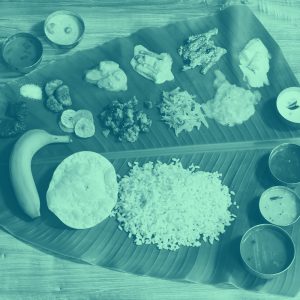 The festival of Onam is believed to be based on the story of the benevolent demon King Mahabali, a popular ruler of Kerala. When Mahabali’s popularity began to threaten the gods, the god Vishnu visited him disguised as a beggar, and asked for all the land he could cover in three steps. The generous Mahabali agreed, but Vishnu grew in size until his first and second steps covered the whole world. When Mahabali offered his head for Vishnu’s third step, Vishnu rewarded Mahabali by allowing the king to return from the underworld to visit his kingdom once every year. Onam celebrates his return.

The fifth day, called Anizham, is when a famous boat race is held. The sixth day, Thriketa, is typically when schools close and preparations for the festival increase. The seventh day is called Moolam and features the start of dance performances. The eighth day, Pooradam, is when people clean the statues of King Mahabali and Vishnu in his disguise.

The ninth day is called Uthradom and is the day that King Mahabali is believed to return from the underworld.

The tenth and last day of the festival is called Thiruvonam. On this day, King Mahabali is said to visit the homes of all Malayali people, who pray, give gifts, and eat the feast known as Onasadya.

This is pookkalam (flower carpet) which is created during Onam in kerala.
@AkashHustle, October 28, 2019
i won't miss college that much when i graduate. but my heart will always crave for the shinkarimelam we play in the amphi during onam. it can't and won't be replaced.
@guyandtheworld, December 18, 2019
Most festivals centre around good food and Onam is no exception. Or perhaps it is. Onasadya as it is called is a spread where one indulges responsibly.
Ruth Dhanaraj, The Hindu, September 10, 2019
SEE MORE EXAMPLES

More information and context on Onam

What are other words used in discussion of Onam?

This is not meant to be a formal definition of Onam like most terms we define on Dictionary.com, but is rather an informal word summary that hopefully touches upon the key aspects of the meaning and usage of Onam that will help our users expand their word mastery.