What does Evil Kermit mean?

Evil Kermit is a meme that depicts what appears to be a “good” Kermit and an “evil” Kermit talking to each other, with each Kermit representing opposing sides of one’s conscience. Evil Kermit is about your internal dialogue, frequently encouraging you to do things that might sound good, but probably aren’t a good idea.

Where does Evil Kermit come from? 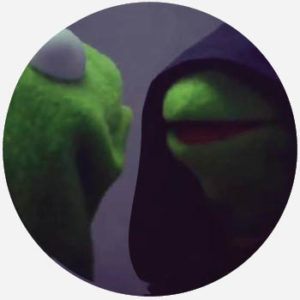 The actual image that appears in the meme is taken from the 2014 movie Muppets Most Wanted. In the movie, Kermit is faced with his evil doppelganger, Constantine, who wears a black cloak. Constantine slaps a mole on Kermit’s face, making them look the same. This frames Kermit for Constantine’s crimes, as there are posters advertising a bounty for him throughout the city.

The meme itself is taken from a still of the two characters facing one another in the film. The Evil Kermit meme first appeared on November 6, 2016. Twitter user @aaannnnyyyyaaaa tweeted the picture with the caption “me: sees a fluffy dog / me to me: steal him.”

The tweet became immensely popular, gaining thousands of likes and retweets in a short period of time. Over the next few days, other Twitter users began to post their own versions of the meme with even greater success.

me: sees a fluffy dog
me to me: steal him pic.twitter.com/XuJFCBi7st

Within a week of the original tweet, other sites began to pick up the meme. It was even acknowledged by Twitter itself in their Moments feature. 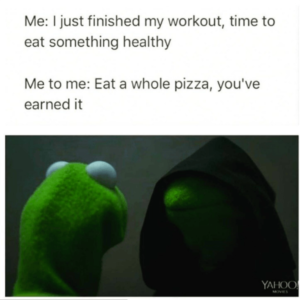 Runt Of The Web
[Evil Kermit image] *ice accidently drops in kitchen* / Me to me: kick it under the fridge
White Rice @RiceBag94 Twitter (November 10, 2016)
SEE MORE EXAMPLES

The meme always involves the original Evil Kermit image or a parody of it, which may be placed before or after the text. Parodies usually include other characters, but they stay in the same physical position as the original, including the evil version of the character donning a cloak.

Me: he apologized. I should just say okay & let it go.

Other me: bring up that thing that pissed you off 3 weeks ago too. Finish him. pic.twitter.com/21Q06Qhxr4

Me: "I'm sure there's a logical explanation for this"

Me to me: "Overreact." pic.twitter.com/1WgwnDZpjs

The meme is meant to read like a window into the creator’s conscious, in a highly relatable way. It always begins with an everyday action or thought that someone might do or have. These are typically pretty mundane. It might be something like “I just finished my workout, time for something healthy.” This is followed by another thought, which is an internal response to the first one. This second thought is much more indulgent or might be considered a poor life choice. In the case of this example, the text that follows is “Me to me: Eat a whole pizza, you’ve earned it.” 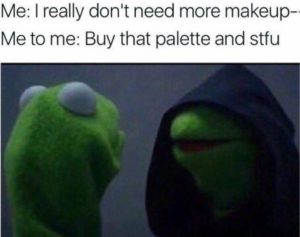 This is not meant to be a formal definition of Evil Kermit like most terms we define on Dictionary.com, but is rather an informal word summary that hopefully touches upon the key aspects of the meaning and usage of Evil Kermit that will help our users expand their word mastery.