What is a meme stock?

A meme stock is a stock (the kind traded on the stock market) that has gained popularity (especially as one to buy) due to some online trend, as if the stock has gone viral like a meme.

The popularity of meme stocks is often influenced by a number of factors, including online trends, rumors, or campaigns on internet message boards. Interest in such stocks is not usually directly tied to the underlying profitability or valuation of the company. For this reason, meme stocks are seen as very risky investments and are associated with inexperienced investors looking to make big profits on a spike in share prices.

Use of the term meme stock was popularized by users of the subreddit /r/WallStreetBets.

Example: I bought shares of GameStop even before it became a meme stock.

Where does meme stock come from? 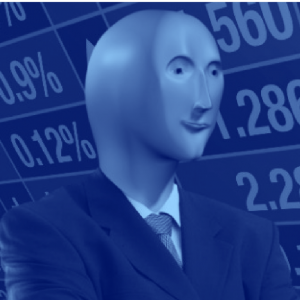 In meme stock, the word meme is used in the sense of a cultural item (such as an image, video, or phrase) that is popularly spread on the internet (and often altered in a humorous way). Meme stocks are both like memes (due to their potential for viral popularity) and influenced by memes and internet trends.

The term meme stock has been used on the forum website Reddit in the /r/WallStreetBets subreddit (subforum) since at least 2015. Awareness and use of the term increased sharply in 2021 due to widespread media coverage around a situation involving stock in GameStop (stock abbrev.: GME).

In 2020, some stock trading enthusiasts became aware of some hedge funds’ short selling of GameStop and other stocks and decided to take the risky move of trying to exploit those positions. This effort was led by a community of amateur stock traders on the social media site Reddit, specifically the subreddit (forum) /r/WallStreetBets. Their plan involved buying large amounts of GameStop stock, using online trading platforms such as Robinhood. In 2021, the sudden buying spree caused GameStop stock to quickly rocket upward in price. The result was what’s known as a short squeeze, in which the price continued to climb as short sellers (notably the hedge funds) desperately tried to buy back shares before the price increased even more. This situation continued to escalate and gain mainstream attention, with the term meme stock being applied to GameStop and other stocks, including AMC Entertainment (AMC), Nokia (NOK), Naked Brand Group (NAKD), and Bed Bath and Beyond (BBBY).

As a result of this situation, meme stock became a popular term to use to refer to trendy stocks experiencing sudden popularity.

Today I sold all my meme stocks, except GME. I will hold a little GME forever just for the memories
@ktm202, September 7, 2021
Meme stock king GameStop rallied 27% on Tuesday as some retail investors came back in full force despite an otherwise quiet market.
Yun Li, CNBC, August 24, 2021

The term meme stock is informal, but it is now used even among professional traders and analysts to refer to stocks whose popularity is largely based on internet trends.

Crazy I can’t legally play online poker but can gamble my life savings on meme stocks from my phone.

I got no news on the crypto front. The heady optimism about some kind of agreement we were hearing this morning appears to have crashed like a meme-stock

This is not meant to be a formal definition of meme stock like most terms we define on Dictionary.com, but is rather an informal word summary that hopefully touches upon the key aspects of the meaning and usage of meme stock that will help our users expand their word mastery.