Feedback
Previous Why Do We Use Euphemisms For Certain Body Parts? Next What's It Called When You Misinterpret Lyrics? 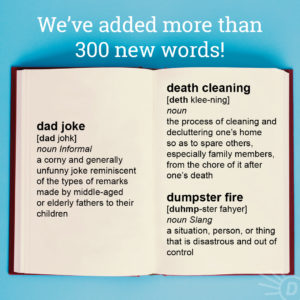 JSYK, we’ve added new words and definitions to the dictionary. Over 300 of them in 2019, in fact. This is one case, we think, where JOMO just doesn’t apply.

We’re sure you’ve guessed by now that these additions include some new internet slang abbreviations, like JSYK (“just so you know”) and JOMO (“joy of missing out”), that reflect how technology is influencing modern life—and modern communication.

Our newest additions—as of April 2019—also spotlight more inclusive and empowered identity and cultural terms that have gained traction in recent years. Aromantic, for instance, points to our expanding vocabulary around gender and sexuality, and describes “a person who is free from romantic attraction to anyone or free from the desire for romantic love.”

Now, we can’t do a deep dive (“a thorough or comprehensive analysis of a subject or issue”) into every new entrant here because we only have one article and that would be too great an infodump (“a large quantity of backstory, or background information, supplied at once”). So, consider this overview an elevator pitch (“a brief talk or pitch intended to sell or win approval for something”) for how our updates are defining the times.

One of the most visible themes in our latest round of additions concerns the visibility of marginalized groups. Three new terms take advantage of the variability symbolized by the letter X in alternative spellings meant to be inclusive of individuals who identify as gender nonbinary.

Recorded in 2000–05, Latinx means “of or relating to people of Latin American descent (used in place of the masculine form Latino or the feminine form Latina).” A related term is Chicanx, specifically describing Mexican Americans and their culture. Both Latinx and Chicanx can also be used as nouns, and they entered the dictionary alongside the gender-binary forms Latin@ and Chican@.

Perhaps influenced by this use of X is womxn, a term dating to around 2010–15 for “a woman (used as an alternative spelling to avoid the suggestion of sexism perceived in the sequences m-a-n and m-e-n, and to be inclusive of trans and nonbinary women).” This word gives greater voice to gender fluidity and inclusivity in intersectional feminism. An earlier term is womyn, which features a similar alternative spelling.

Racial identity also figures prominently in our updates. Popularized by the 2018 blockbuster Black Panther, Afrofuturism is a marquee addition. It refers to “a cultural movement,” as expressed through art, cinema, literature, music, and fashion, “that uses the frame of science fiction and fantasy to reimagine the history of the African diaspora and to invoke a vision of a technically advanced and generally hopeful future in which black people thrive.” Author and critic Mark Dery coined the term in his 1993 essay “Black to the Future.”

But, the black experience is no monolith. A term like colorism—“differential treatment based on skin color, especially favoritism toward those with a lighter skin tone and mistreatment or exclusion of those with a darker skin tone, typically among those of the same racial group or ethnicity”—acknowledges the challenges and complexities of discrimination even as Afrofuturism elevates the profile of blackness in culture.

Where identity is at work, as colorism shows, power and politics are also often at play.

The success of Black Panther, for example, unfortunately sparked some whitelash, a blend of white and (back)lash for “a hostile or violent reaction by white people to the advances or influx of other racial or ethnic groups.” While newly added to our dictionary, neither the term—nor the phenomenon—is itself new, first recorded in 1965–70.

Calling out whitelash may prompt other race-based phenomena (also now logged in our dictionary). It could, on the one hand, elicit white guilt, “the feelings of shame and remorse some white people experience when they recognize the legacy of racism and injustice and perceive the ways they have benefited from it.” Or, on the other hand, it could trigger white fragility, “the tendency among members of the dominant white cultural group to have a defensive, wounded, angry, or dismissive response to evidence of racism,” a term coined by academic and author Robin DiAngelo in her 2011 article “White Fragility.”

Another notable—and relevant—coinage in our update is (the) male gaze: “the assumption in visual and creative arts that the default or desired audience consists of heterosexual males, and inclusion of women in narrative or art should seek to please this audience with the objectification or sexualization of these depicted women.” Feminist film theorist Laura Mulvey first formulated the male gaze in her 1975 essay “Visual Pleasure and Narrative Cinema,” but the term has seen a surge of awareness, especially in connection with the #MeToo movement.

And we have another term that has spread in the #MeToo movement as well, and which we might consider the male gaze a manifestation of: toxic masculinity (“a cultural concept of manliness that glorifies stoicism, strength, virility, and dominance, and that is socially maladaptive or harmful to mental health”).

Issues of identity and power are playing out in ever new ways online—and generating ever new words for us to document.

Shitposting is a form of trolling when someone “posts off-topic, false, or offensive contributions to an online forum with the intent to derail the discussions or provoke other participants.”

Less malicious, but to some just as maddening, is virtue signaling, a term credited to writer James Bartholomew in 2015. We define this as “the sharing of one’s point of view on a social or political issue, often on social media, in order to garner praise or acknowledgement of one’s righteousness from others who share that point of view, or to passively rebuke those who do not.”

Yet others on social media, perhaps in a baffling blend of the two tactics, may act like crybullies, a riff on crybaby but meaning “a person who self-righteously harasses or intimidates others while playing the victim, especially of a perceived social injustice.”

Whatever the behavior, now seems to be the right time for this addition as well (even though it dates back to the 1970s): media literacy. It is “the ability or skills to critically analyze for accuracy, credibility, or evidence of bias the content created and consumed in various media, including radio and television, the internet, and social media.”

Perhaps another tool to combat a culture of misinformation is … less screen time? Considering it is “the amount of time a person spends watching or interacting with content on the screen of a computer, phone, TV, gaming console. etc.,” this one is only becoming more relevant.

As you may have noticed, our 2019 updates track some of the heaviest topics of our day, but, luckily, they also have a lighter side.

Of dad jokes and brain farts

Did you know gullible isn’t in the dictionary? Womp womp.

OK, but dad joke now is. As is womp womp, because you can’t have one without the other.

A dad joke is “a corny and generally unfunny joke reminiscent of the types of remarks made by middle-aged or elderly fathers to their children.” And, someone might issue a womp womp in response to a dad joke.

Womp womp is used to dismiss or to mock a failure, loss, or the like. First recorded in 2005–10, this slang interjection and verb imitates the sound made by a trombone to indicate a wrong answer or other minor humiliation, used on TV game shows and in movies.

Now, isn’t there a term for a word that imitates a sound?* Ah, it’s on the tip of our tongues. It seems we’re having a brain fart, or “brief mental lapse, especially an instance of forgetfulness or confusion.”

Yes, brain fart is now in the dictionary—as are hundreds of other terms that touch on the many and varied cultural phenomena of our time, ranging from death cleaning and thirst trap to impostor syndrome and rage quit.

Welp, speaking of quitting, we’ve run out of room to talk about our new words. And we use welp because it’s the perfect interjection (really it’s “an informal variant of well, used to indicate disappointment, resignation, or acceptance at the beginning of an utterance”) to reflect our feelings in this here final note. For, if our 2019 updates ask us to accept anything, it’s that our language—as our times—will never sit still.

*And that brain fart we had? It’s called onomatopoeia. JSYK.

Previous Why Do We Use Euphemisms For Certain Body Parts? Next What's It Called When You Misinterpret Lyrics?
RELATED POSTS