A bravolebrity is someone who is famous only for being on a Bravo reality TV show, such from their hit franchise The Real Housewives.

Where does bravolebrity come from? 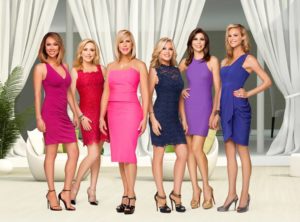 Bravolebrity is a blend of Bravo and celebrity. Since 1980, Bravo is a cable TV network that produces, among other content, binge-able reality shows. The show responsible for the network’s booming success, and the source of the word bravolebrity, is The Real Housewives. The series kicked off in 2006 in Orange County, California.

The blog Bravolebrities.com began publishing commentary on the show in 2009. An Urban Dictionary entry followed for bravolebrity in 2011. Bravo itself has since heavily used bravolebrity in their marketing and on their website.

Is it pathetic that I wanna be a #bravolebrity?? I don't think so.
@eyeEEsha, June 2010
It seems like every other Bravolebrity had the idea to become a electronic singer after too many glasses of champagne, but Gretchen of the OC appears to have come from a genuine place with this ballad composed in honor of her late fiancée.
Amanda Ross, Her Campus, February 2018
Wow, my first time being blocked by a bravolebrity. Honored! 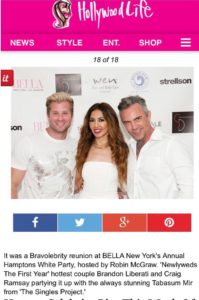 While they seem to lead glamorous lives, bravolebrities are still just reality TV stars. Being a bravolebrity isn’t exactly the highest of compliments, as it can imply one is second-rate and popular for outrageous antics. It’s hard to break out of the bravolebrity reputation, but a few have branched out from Bravo TV and begun other creative and business ventures.

Bravolebrity is used by fans and media outlets alike. Fans often use the hashtag #bravolebrity when tweeting at their favorites.

Honestly. @erikajayne is everything I want to be when I turn from a bravo baby to a real #bravolebrity.

Tabloid magazines like People and Bravo TV embrace the term as well.

Gossiping about bravolebrities, it seems, is as important as watching them on their shows. Frequent topics of discussion include stories about real-life encounters, reflections on the relationship complexities of the show, updates on off-screen shenanigans, or maybe a roast of a given bravolebrity’s messy behavior.

She's a bravolebrity that was on a show called, Ladies of London.

She's a frazzled mess on the show..

This is not meant to be a formal definition of bravolebrity like most terms we define on Dictionary.com, but is rather an informal word summary that hopefully touches upon the key aspects of the meaning and usage of bravolebrity that will help our users expand their word mastery.