What does Krampus mean?

Especially popular in Germanic and Slovakian cultures, Krampus is a sinister counterpart to Santa Claus who, instead of rewarding good children, punishes wicked ones.

Where does Krampus come from? 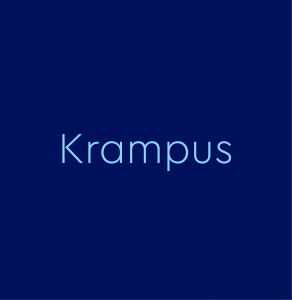 In Germany, Austria, and neighboring Slovakian countries, the malevolent, mythological Krampus takes the form of a hairy half-goat, half-demon who disciplines children in the weeks before Christmas.

While various Santa Claus figures are jolly old men who reinforce good behavior with the promise of gifts and candy, Krampus punishes the naughty children with whips and birch branches, threatening to drag them down to the underworld if they misbehave. St. Nicholas, a Santa Claus figure, and Krampus often appear together, with St. Nicholas tending to the good children and Krampus menacing the naughty ones. To strike more fear into children’s breast, the Krampus goat-demon is usually depicted as a devil with a long, prehensile tongue, his feet a mix of human and hoof.

The name Krampus stems from the German word krampen, meaning “claw,” and the legend is pre-Christian. In the 12th century, the Catholic Church attempted to ban Krampus celebrations around Christmas because of the horned character’s resemblance to the devil. Krampus was also banned in Austria in the 1930s when the country was under fascist rule, as the Christian Social Party argued the character was unholy.

Despite these efforts, Krampus persisted in popular seasonal lore, with contemporary celebrations featuring parades of people wearing demonic-looking Krampus costumes in some European countries in December. In various countries Krampusnacht or “Krampus Night” is celebrated on December 5.

In the 2000s, the growth of the internet exposed the traditional, and unusual-seeming, Krampus legends to more people across the world, giving Krampus a greater and more international presence around Christmastime. Given the figure’s pre-Christian roots, many neopaganists came to embrace Krampus.

Interest in Krampus spiked on Google in late 2015 and early 2016, coinciding with the release of the American horror-comedy film Krampus, which introduced the figure to even more audiences.

I just bought cute Krampus pjs for Christmas
@anaiszombie, November 22, 2020
anytime someone's bad in my house my 3 y/o sister says "you better stop or Krampus will get you"
@mdunakey, December 6, 2015
It is said that during the Christmas season children go missing or are beaten with birch branches, they are then placed into a sack and taken to the Krampus’ lair where they are either tortured or beaten.
Cortney Drakeford, International Business Times, December 6, 2016
SEE MORE EXAMPLES

During the Christmas season, Krampus is widely referred to in Germany, Austria, Northern Italy, the Czech Republic, Slovakia, Croatia, and other countries, recognized on the level of Santa Claus.

Gruss Vom Krampus! Tonight is Krampusnacht! Better be good boys and ghouls – or you’ll get the ruten bundel! pic.twitter.com/pclStke2PL

In the 2000s, the frightening appearance and threats of Krampus led some to criticize the figure as too traumatic for children. Nevertheless, his darker nature has also made him a popular alternative in places like the US, where some find Santa Claus too soft or boring.

Increasing awareness of Krampus has led to his increasing commercialization outside the 2015 Krampus film, with San Francisco hosting a bar-hopping Krampus Krawl each Christmas. Krampus has appeared in popular TV cartoons such as American Dad and Scooby Doo.
Some refer to Krampus as the Krampus.

This is not meant to be a formal definition of Krampus like most terms we define on Dictionary.com, but is rather an informal word summary that hopefully touches upon the key aspects of the meaning and usage of Krampus that will help our users expand their word mastery.