What does happy holidays mean?

The phrase happy holidays is a festive, secular greeting used most often during the winter holiday season. It is similar to other general greetings such as season’s greetings. These phrases tend to be capitalized as a formal greeting (cf. Merry Christmas! Happy New Year!).

Where does happy holidays come from? 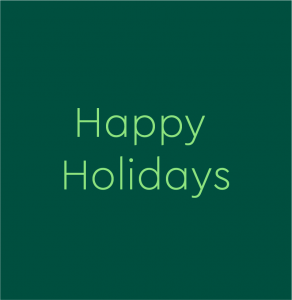 The phrase happy holidays has been used in the United States since at least the mid-1800s. The word holiday, which dates back to before 950, stems from the Old English word hāligdæg, meaning “holy day.”

Happy holidays and other generic greetings have been used in the United States for over 150 years. For example, an 1863 Philadelphia Inquirer advertisement for children’s holiday gifts proclaimed “Happy holidays are coming!” to advertise its “presents for young and old.” As they are wont to do, advertisers use phrases like happy holidays and season’s greetings to market gifts to as many customers and as many occasions as possible.

Happy holidays was embraced by the wider public as a standard phrase for acknowledging not only Christmas, but the overall season of Advent as well. As Christmas became a more secular holiday, use of the phrase expanded to include all the winter holidays and the celebration of New Year’s.

Some American Christian conservatives turned against the phrase happy holidays in the mid-2000s as the conservative news outlet Fox News began to criticize the term during its coverage of a “war on Christmas.” According to Fox News commentators, happy holidays was allegedly part of a liberal campaign against Christianity and a wider push for political correctness as well as a censorship of Christmas.

In 2016, polling found that the preference of using merry Christmas or happy holidays as a greeting was related to a person’s political views, with Republicans preferring the former and Democrats the latter.

You are most likely to see happy holidays used during the winter, especially near the end of November, throughout the month of December, and into the New Year. It is used to wish people a joyful holiday season.

Happy Holidays from our doggos to yours 🎄🐾 pic.twitter.com/7DukMOrTiS

Thank you to all who supported city's annual food and toy drive. Merry Christmas and Happy Holidays! #service pic.twitter.com/waYFRN0ssF

The bell still rings for us. Happy Holidays from ours to yours! pic.twitter.com/ilgEDFCWpo

This is not meant to be a formal definition of happy holidays like most terms we define on Dictionary.com, but is rather an informal word summary that hopefully touches upon the key aspects of the meaning and usage of happy holidays that will help our users expand their word mastery.