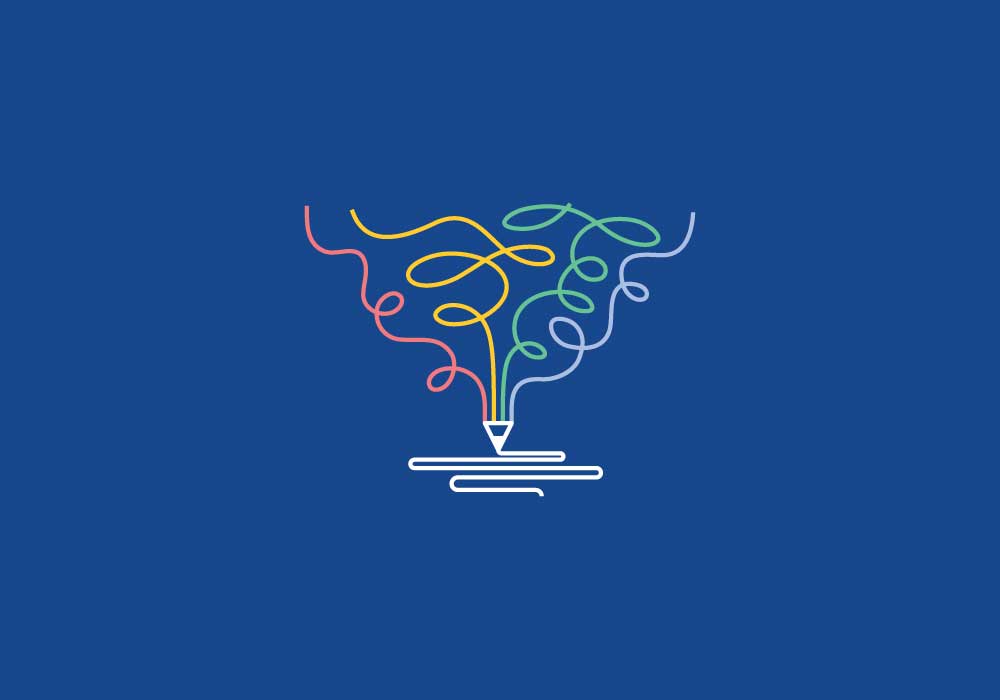 Since at least the Bronze Age (c.3300–300 b.c.), humans have been writing things down. They didn't have spell-check back then, though. In fact, the Latin alphabet you're familiar with (and that this is written in) is dated to around the 700s b.c.—and that is just one of many scripts.

In the many centuries since, Western peoples have cycled through countless types of handwriting. And, while news stories like to sound the alarm that handwriting is going the way of the dodo thanks to the type (vs. script) computers and cell phones, there's no sign that people have given up scribbling by hand altogether. After all, how would we scratch out our grocery lists? Oh wait, a notes app? Anyways ...

We sometimes think of our handwriting as unique as our fingerprint. And, to a certain extent, our own personal handwriting is unique—that's why, if you keep up with your police procedurals, forensic handwriting analysts can match Is and Ts to a person's identity. But that doesn't mean that there aren't trends in handwriting over the centuries. These trends are shaped by writing tools, cultural values, and the language itself.

We are going to look at a few of the major genres of handwriting styles over the millennia. You'll learn why medieval manuscripts seem so undecipherable to us today, how the invention of cursive was linked to an Italian philosophical movement, and how good ole competition shaped American handwriting as we know it today. 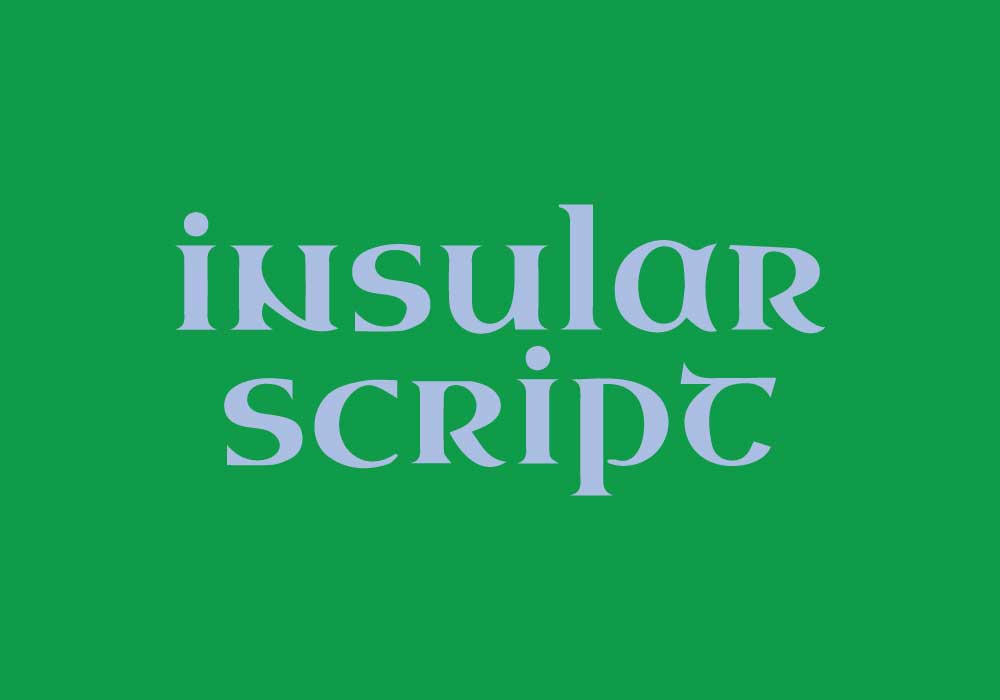 Before universal education, very few people knew how to write. In fact, the only people who wrote anything on any regular basis were monks in monasteries who painstakingly copied out texts and wrote manuscripts. That's where some early types of handwriting come from.

Insular script looks like what we today think of as the Irish, Celtic, or Gaelic font. Many of the letters in a word are connected and have serifs (the little lines at the ends of letters). In insular script, many of the letters are also distinctively rounded, notably Ts. It is famously used in illuminated manuscripts such as the Book of Kells. 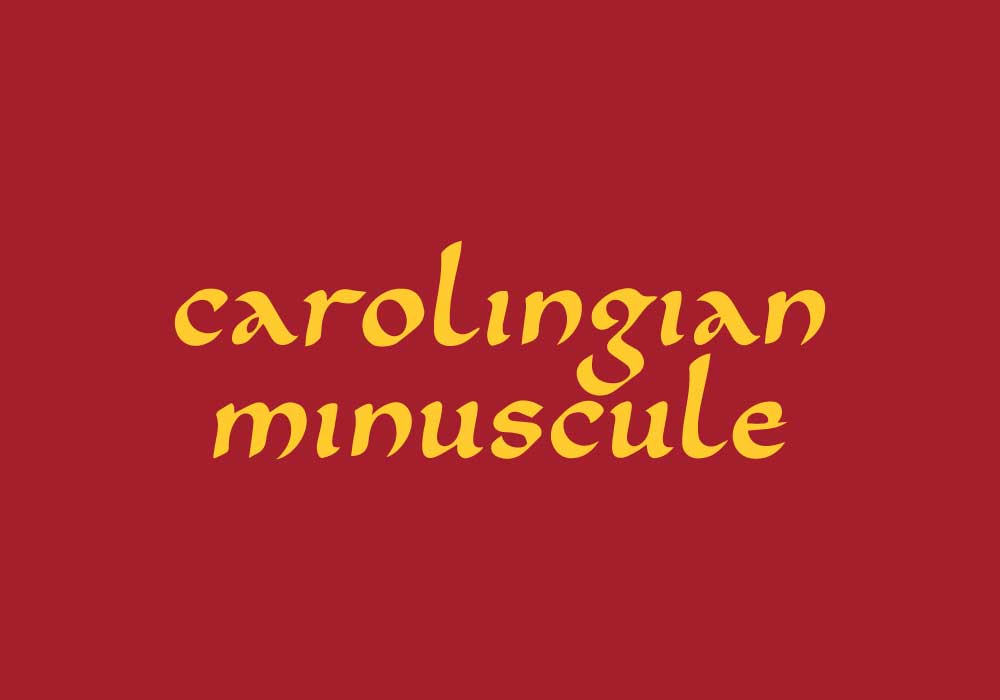 The name of the script, Carolingian, comes from the Latin form of the name of Charlemagne (also called Charles the Great): Carolus. Minuscule in Latin means "smallish," what we would today refer to as lowercase. It was used from about a.d. 800–1200.

Incorporating elements of the earlier insular script, Carolingian minuscule is the inspiration for modern uppercase and lowercase handwriting in the Latin alphabet today. Carolingian miniscule also uses slightly rounded, connected letters, like insular script. But, its serifs are much smaller and the letters have fewer flourishes. It also provided spaces between words.

Manuscripts written in Carolingian minuscule were considered easier to read than those that come later, which are written in the ominously named blackletter. 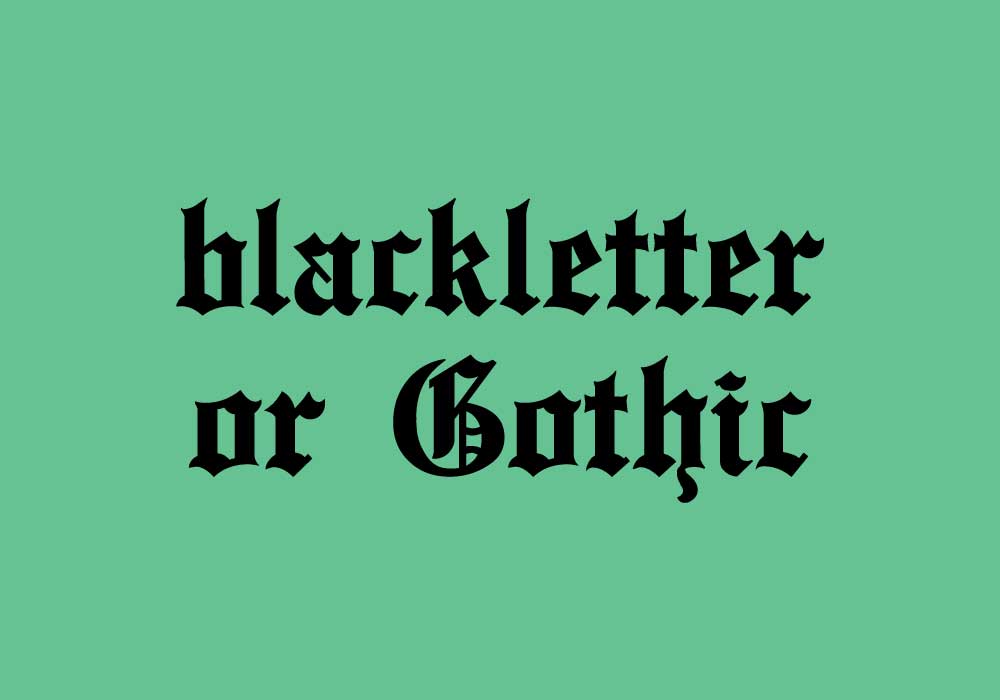 Carolingian miniscule, though considered easier to read (at least historically), was very time-intensive to write. When the demands for reading material increased in the late 1100s with growing literacy, scribes needed to come up with faster ways to write. That's how blackletter emerged, it's thought. Because it used less loops and flourishes, it could be written out quickly.

Blackletter is also known as Gothic script, as it was associated with ancient Germanic tribes in the early Renaissance. While blackletter handwriting was once popular throughout Europe, it's true that it had the longest staying power in Germany. For a while, it was even the official typeface of the Nazi party, until it was banned in 1941 because they believed they were actually subversive "Jewish letters."

You can still see examples of the typeface in Germany and Austria. A version of it is also seen in "Ye Olde Shoppe" English signage. Blackletter is different from other handwritings because the lines are big and bold. The letters are compact and sharp with curvy flourishes coming off the ends. 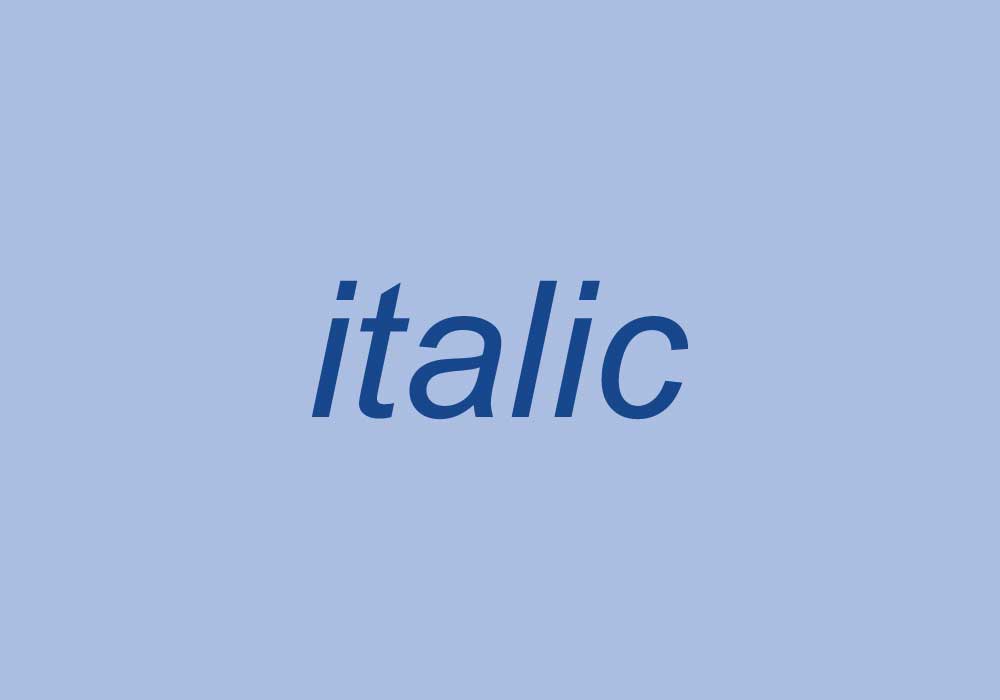 During the Italian Renaissance in the 1400–1500s, humanists were fascinated with (what they thought were) ancient manuscripts. Many felt that handwriting should be simple and clear to read—and blackletter was definitely not that.

A scribe from Florence, Niccolò Niccoli, helped develop a type of script that became known as italic script. It was inspired by manuscripts written in Carolingian miniscule from the Holy Roman Empire, which Renaissance scholars thought were ancient Roman writings. (Italic refers to ancient Italy.)

Italic script was, as you might expect, was more cursive-like. Letters in a single word are connected. There are nearly no loops, serifs, or flourishes in the handwriting. It was written at a slight angle to the right. Italic script helped inspired today's italic type (think italics and italicized). 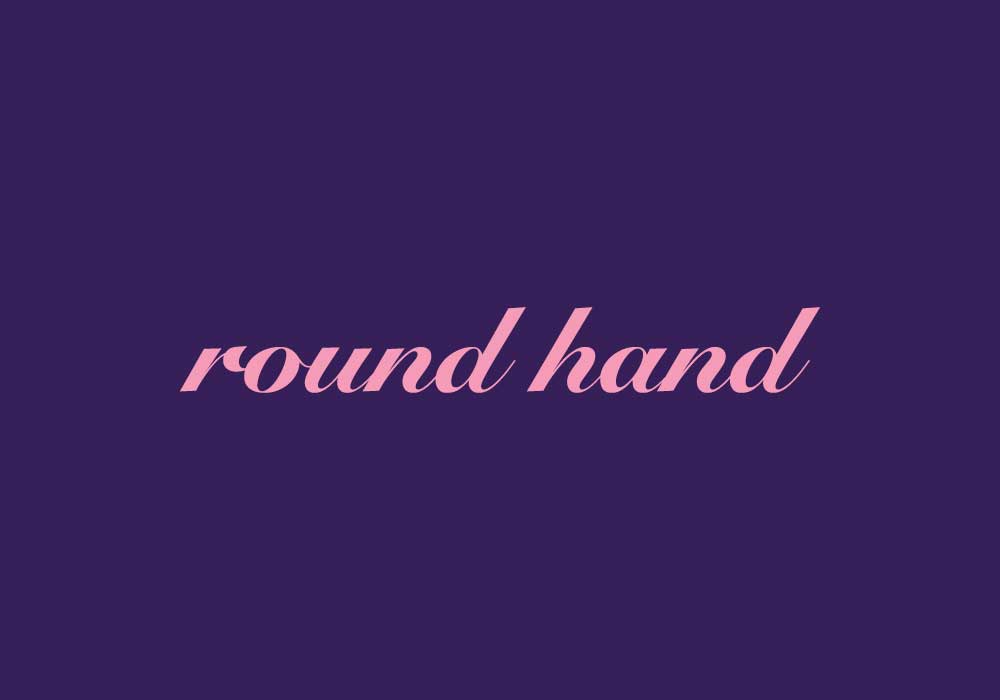 By the 1600s, French officials felt there were too many—and too hard to decode—italic scripts scrawling around. That's how the round hand style of handwriting developed. Round hand refers to the very full and rounded style of many of the letters. It spread to England and then the American colonies. The Declaration of Independence was written (technically what is called engrossed) in a form of round hand by a professional penman, Timothy Matlack.

Today, round hand can be difficult to read because it's so ornate. But, there's no denying it's a beautiful handwriting. It looks not too dissimilar from the cursive handwriting you may have learned in elementary school. It is known for its sweeping flourishes on the letters. 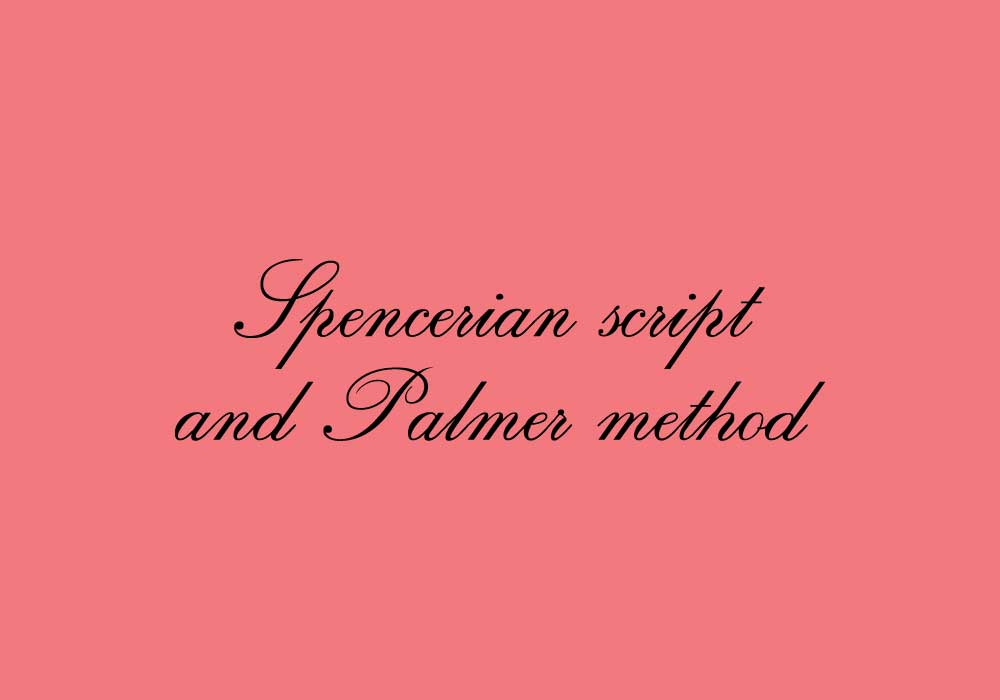 By the 1800s, the ornate round hand scripts were simplified into the Spencerian script in much of the US. Platt Rogers Spencer was an educator (and abolitionist) who believed strongly in good penmanship. His handwriting guides were bestsellers in the mid-to-late 1800s, thanks in part to the growth of business schools.

His namesake, Spencerian script, might be considered the first truly American handwriting. Spencerian script still has some small flourishes, particularly in the loops of capital letters. But, it is mostly a simple cursive handwriting, although the letters are less round than round hand. You probably recognize it: the Coca-Cola logo is written in Spencerian script. So is the Ford logo.

In the late 1800s, a man named Austin Palmer felt his handwriting system was faster and more practical than Spencerian script—as well as the growing threat of typewriters. His script, called the Palmer method, has even fewer flourishes than Spencerian script, even on the capital letters. Gone, also, were the little squiggles at the end of some words. Palmer was ultimately fighting a losing battle, though his script did overtake Spencer's. It resembles, though, cursive handwriting some Americans still use today. 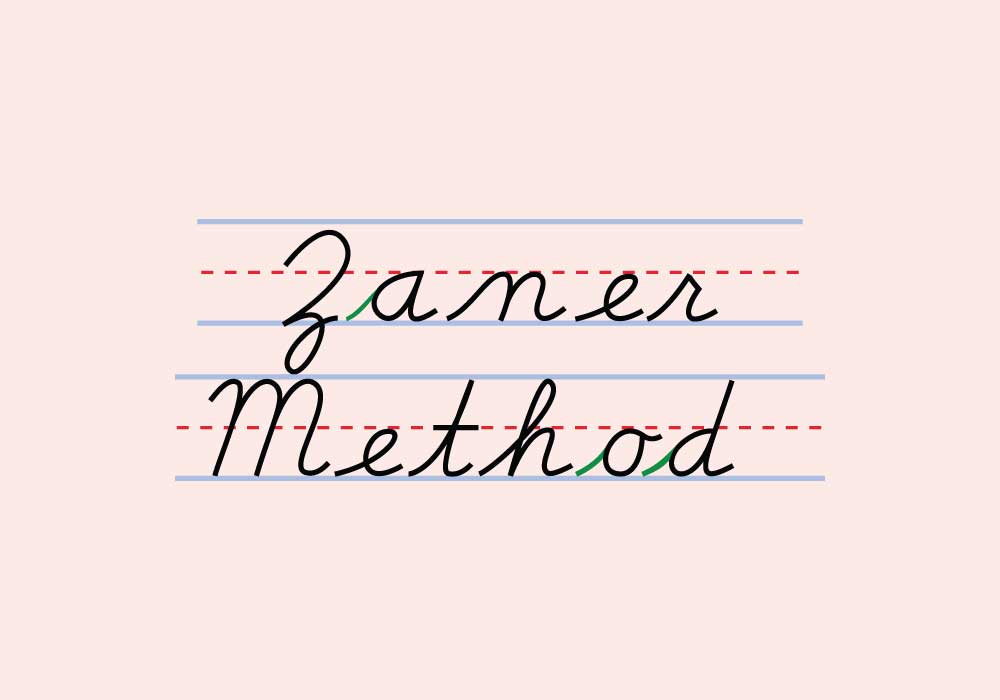 Think back to when you were in elementary school. You probably learned how to write in block letters first, tracing out letters on dotted line guides. A few grades later, you were probably taught to write in cursive. That's likely due to the influence of the Zaner-Bloser company. (They are owned today by Highlights. Yes, as in the children's magazine.)

Charles Paxton Zaner, a professional penman, developed a method of of handwriting in the late 1800s. It was published as The Zaner Method of Arm Movement Writing in 1904 and became widely used in schools. Today, most American schools still use some variation of his method, now generally referred to as Zaner-Bloser.

Zaner-Bloser is basic and clean, with a print (straight up and down) and cursive (slightly slanted) form. The method is simple to learn, easy to read, quick to write, and has zero frills. It's designed for young children to be able to grasp it easily. It might not be as beautiful as insular script, but it gets the job done.