If it's 11:11, make a wish! Some people believe 11:11 is a magic number or lucky time of day, good for making a wish ... or reaching cosmic enlightenment. 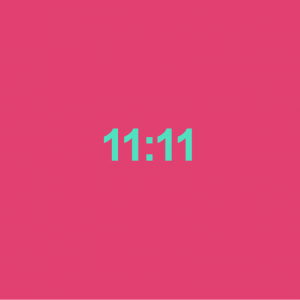 The origin of 11:11 as a lucky number myth is murky, but it draws on numerology, which believes that numbers can have a special influence on our lives.

The symmetry of 11:11 is appealing to numerologists, including one in particular: Solara Antara Amaa-Ra, a California woman who founded a New Age spiritual group, Star-Borne Unlimited, in 1986. By 1989, she and her followers were espousing an entire cosmology that revolved around the number and time 11:11.

A larger New Age movement helped spread 11:11 as a number of mystical significance, such as a time when consciousness is especially open to the universe. It is a particular favorite of the Israeli psychic, magician, and numerologist Uri Geller. In 2015 on his blog, Geller claimed to show how various world events, from the Russian Revolution to Genghis Khan’s invasion of China, are connected via 11:11.

Helped along by the likes of Amaa-Ra and Geller, folk belief in 11:11 as a magic number spread in the 1990–2000s. It has even filtered into a practice on Snapchat where people send someone they are crushing on a snap displaying the time 11:11, as if to say You’re the one I’m wishing for.

I started experiencing this rather bizarre occurrence when I was forty years old, at first I thought they were coincidences, I would stand with my back to a digital clock and something made me turn around and I would notice that the time would be 11:11. These incidents intensified I would be checked into hotel rooms on floor 11 room 1111 … It is difficult for me to decipher what this is all about but my intuition tells me its positive.
Uri Geller, UriGeller.com, September 2015
Does your 11:11 wish turn into a prayer for you too?
@reydinero__, August 11, 2020
At 11:11 I always make a wish that probably won’t even come true anyways but I’m still obsessed with doing it
@JovialJemima, August 10, 2020
SEE MORE EXAMPLES

11:11 sees use by the mystics and romantics among us, sometimes in earnest belief in its transcendent power but other times just as a little bit of whimsical wish-making. Some younger Snapchat users may even use 11:11 as verb for reaching out to a love interest, e.g., Ooh, you should totally 11:11 him and see if he’s interested.

People also use 11:11 on social media to indicate they are making a wish, whether it be of seeing more cat pictures or seeing a close friend again. Sometimes people list out loved ones with 11:11, the number serving as a kind of talisman.

11:11 exams with passed or high scores

In 2000, the emo band Something Corporate released the song “Konstantine” about staying up and thinking about a girl. It includes the line: “I always catch the clock, it’s 11:11.” This inspired the 11:11 AM Charity, which supported Andrew McMahon (pianist and vocalist in the band) during his battle with leukemia in 2005 before going on to support children with cancer.

And oh, there’s no evidence that 11:11 has any magic powers—but we suppose it never hurts to make a wish.

This is not meant to be a formal definition of 11:11 like most terms we define on Dictionary.com, but is rather an informal word summary that hopefully touches upon the key aspects of the meaning and usage of 11:11 that will help our users expand their word mastery.