U d0n7 kn0 1337, n00b? 1337 is a language for internet users known for replacing letters with numbers or symbols. The term itself has gone on as a slang term for “extremely skilled (at gaming or computing)” or, more generally, “awesome.” 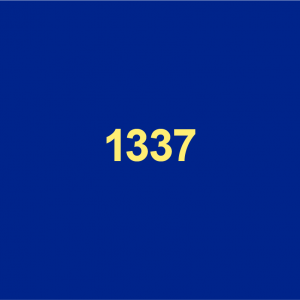 1337, or leetspeak, as a kind of language goes back to the 1980s, when users of computer Bulletin Board Systems (BBS) would shorten words, e.g., you to u and are to r, for convenience. As BBS administrators started to crack down on naughty content being shared on their systems, users also began substituting numbers and symbols into words to evade detection and sometimes simply to be different (using 4 for A or 3 for E, as in g4m3). A now classic example, pPorn, became p0rn (with a zero for the O), p()rn, or deliberately misspelled as pr0n.

Misspellings—and an overall visual disorientation, as in this example from Tech News, age duz not protek U frm luv bt luv 2 som Xtnt proteks U frm age, or “age does not protect you from love but love to some extent protects you from age”—are a core feature of 1337. While some misspellings appear intentional like pron, others emerged from accident, like pwn, “to totally defeat someone in a video game,” a typo for own resulting from the fact that the P is right next to the O on QWERTY keyboards. Someone who pwns another is a pwnzor and the act of doing it pwnage (with -age a favorite suffix of 1337).

1337 itself comes from the word elite. Users with elite status on BBSs had the widest access to the system and usually had to be the best hackers in order to achieve that level of access—hence 1337 as slang for “skilled,” in contrast to n00b, or newbie. Elite was modified to leet, then written with numbers as 1337 (1 for L, 3 for E, and 7 for T).

1337 really started spreading during the late 1980s and early 1990s, coinciding with the rise of the internet and popular computing. Online video games were much more primitive then, and many were almost-entirely text-based due to graphical limitations of the time. These early role-playing games often consisted of users sending text to each other. The experienced BBS users had the computing knowledge and hardware to access these games most easily and continued to employ 1337.

As online gaming improved and computers became more accessible and less technical, 1337 spread to more and more internet users. Popular computer games of the 1990s, like Doom (1993) and Quake (1996), were both visually impressive and included online multiplayer modes, allowing players to chat with and trash-talk each other—and helping to further boost 1337.

By the early 2000s, online games like World of Warcraft had become global sensations, boasting millions of players. Around this time, games had become much more visually advanced, with typing text widely replaced by talking over microphones and headsets. But gamers had still spread 1337 to almost every gaming community through online forums and message boards.

PUBG is down tonight so we're digging into Fortnite. Chances are we'll get slaughtered by some pros with uber 1337 skillz. See you at 9pm.
@CraigSkitz, January 24, 2018
When I first went to Blackhat/Defcon, it was with the wide-eyed anticipation of "I’m going to go listen to all of the talks that I can, soak up all of the information possible, and become a supar-1337-haxxor." What a let-down of an experience that was.
Hacker "The Lamb" quoted by Peter Maass, The Intercept, June 28, 2016
Just received a txt on my phone: "1337 pwn noobs" With time stamp: 13:37. Funny. :)
@Sti9nsky, July 22, 2010
SEE MORE EXAMPLES

1337 remains online but the widespread availability of audio chat and programs like Skype has made a text-based language like 1337 dip. Gamers and hackers do often employ key items from 1337 as in-group signifiers or internet-cultural shibboleths. This includes 1337 for saying something is “excellent.” Other examples are haxor for hacker and, as noted, forms of pwn and n00b.

'Doom' rendered in ASCII is the most 1337 way to play https://t.co/M3i0TxFcvV pic.twitter.com/jFmvcieUS1

Might play fortnite later and i want someone to carry me, my gamertag is LILSARGE1337

1337 and its term are also used to mock internet trolls or avid gamers and as inside jokes.

This is not meant to be a formal definition of 1337 like most terms we define on Dictionary.com, but is rather an informal word summary that hopefully touches upon the key aspects of the meaning and usage of 1337 that will help our users expand their word mastery.