1738 is a type of cognac by Rémy Martin popularized by its association with hip-hop artist Fetty Wap. 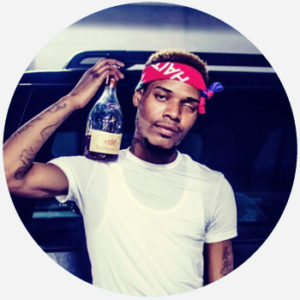 Rapper Fetty Wap’s 2014 hit debut single “Trap Queen” opens with the notoriously cryptic lyrics: “RGF productions / Remy Boyz, yeah / 1738.” The following year, the rapper revealed that Remy Boyz 1738 was a record label he was working on founding. The name was inspired by a brand of cognac called Rémy Martin 1738 Accord Royal, which Fetty Wap explained was “the finest liquor in the urban district.”

According to Rémy Martin, the name of the liquor, first released in 1997, commemorates the year King Louis XV of France recognized the excellence of the cognac of Rémy Martin, its founding producer and namesake, by giving him royal permission, where the “Accord Royal” in the name comes from.

1738 was the year that a dark wizard took Fetty Wap's eye and cursed him with immortality
@gudcone, April, 2017
Shout out to remy boyz whoeva sippin #1738
Fredo Eastbound Smith, Facebook, December, 2016
To put it frankly, what's a Remy Boyz video without some of that good 1738?
Mark Braboy, “Monty And Fetty Wap Come “Right Back” With A Grown Man Approach,” Vibe, October, 2016
SEE MORE EXAMPLES

Much like the number 420, which refers to marijuana, 1738 can be posted on its own to signal one is drinking the cognac or identifying with Fetty Wap and his self-styled, classy brand of hip-hop music and culture. 1738 can be used as a hashtag or even a verb (e.g., “1738ing through life”).

The original obscurity of the number inspired a creative fan theory that 1738 alludes to Fetty Wap’s eye, sometimes referenced in uses of the term. The rapper had glaucoma in both eyes as a child, and his doctor was able to save one but not the other, resulting in a prosthesis.

Based on this information, one Twitter user broke down 1738 as 5:38 in military time, and then associated it with Matthew 5:38, a Christian Gospel passage concerning the penal concept of an eye for an eye. The tweeter concluded, with apparent facetiousness, that Fetty Wap had given his eye for fame. References to 1738 sometimes include images of Fetty Wap’s prosthetic eye.

This is not meant to be a formal definition of 1738 like most terms we define on Dictionary.com, but is rather an informal word summary that hopefully touches upon the key aspects of the meaning and usage of 1738 that will help our users expand their word mastery.