or bell-end or bellend [ bel end ]

What does bell end mean?

A bell end is slang the head of a penis. It’s used in UK as an insult for a jerk or someone acting stupid or contemptibly. It’s a bit similar to calling someone a dickhead.

Where does bell end come from? 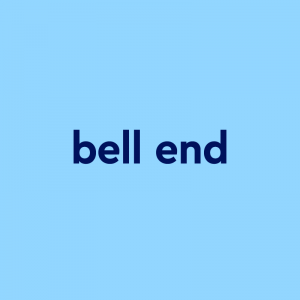 Bell has been used as slang for penis since the 1500s, apparently due to its similarity to the form of a penis and a bell’s ringer. For instance, a bawdy 1593 poem describes a woman who tricks a man by “wagging his bawble and ringing his bell” and then robbing him.

So, if the penis is the bell, than the head is its end, also due to the likeness of a bell’s shape and the tip of a penis (glans). According to Green’s Dictionary of Slang, bell end has been used to refer to the head of the penis since the 1960s.

Bell end continues to see use in that sense. For example, a 2003 UK sex education book uses bell end for that part of anatomy. While the text uses bell end to achieve a casual tone, the term is also deployed for humor. The Sunday Sport, a British tabloid, likes to publish headlines about people sticking their bell ends into hot food, for example.

Bell end has been used as an insult since at least the 1990s, when it was thrown around on UK football internet forums. It’s common for profane words for body parts to be extended as derogatory terms, cf. dick or ass.

Used to like Terry Christian. But the bloke has turned into a grade A bellend!!

In 2014, BuzzFeed published a helpful quiz to help people determine how much of a bell end they are. In 2017, when dancer Michael Flatley agreed to perform at Donald Trump’s inauguration, someone set the website www.collosalbellend.com to redirect to Flatley’s website.

For 5 days only you can learn about how Britain is a gigantic bellend for only 99p.

If you like my tweets and would like to help me out, downloading this will help SO much. Thank you all!https://t.co/INBOQjncDB pic.twitter.com/Q3RPAPI6ST

Morning. I just accidentally slapped my bellend with the hose. How’s your morning going?

@JBizzleBeard, August 30, 2018
At the pub—Britain’s hallowed, sticky-carpeted crucible—we all express our quintessential anglo-saxon traits ... Low-key alcoholism. Mediocre flirting. Thrilling at the likely prospect of a bloody punch-up ... But even as we do, let’s take a moment to celebrate our proud nation’s versatile bellend community.
Andy Hill, Metro, July 28, 2017
I love the fact more people have Retweeted this (to call him a massive fucking bellend) than have liked it.
@Pierrick_SZN, August 30, 2020
SEE MORE EXAMPLES

Bell end is considered vulgar, but it’s not the worst insult you could pull out. BBC America described it as “not safe for visiting dignitaries but perfectly fine salty talk among friends”—perhaps along the lines of asshat or douchebag.

Apparently it’s even the kind of thing you might admit to being sometimes: YouTube celebrity KSI definitely seems to think so, based on his 2015 autobiography called I Am a Bellend.

There’s a street in the British town of Rowly Regis coincidentally named Bell End. There was a petition to change the name in 2018. That was followed by a counter-petition, which gained more signatures, to the delight of juvenile jokesters everywhere.

This is not meant to be a formal definition of bell end like most terms we define on Dictionary.com, but is rather an informal word summary that hopefully touches upon the key aspects of the meaning and usage of bell end that will help our users expand their word mastery.