Feedback
deal with it
ded

What does Debbie Downer mean?

Debbie Downer is a name for someone who is constantly making others feel bad or dampening the mood of a group with negative comments.

Damn, Gina, that’s what she said, like a boss, Turd Ferguson, more cowbell

Where does Debbie Downer come from? 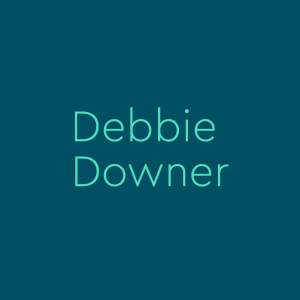 While a downer has been used to refer to a “depressing person” since at least the 1970s, the name Debbie Downer was popularized by a hit Saturday Night Live sketch starring Rachel Dratch, who played a character named Debbie Downer. This character consistently ruins a group’s fun by sharing unsolicited sad remarks.

Although many assume Debbie Downer was an expression prior to the sketch, Dratch confirms that the term took off after the sketch character became popular. On explaining how the idea for the Debbie Downer character came to her, Dratch explained, “I was on vacation in Costa Rica, and when I told someone that I was from New York, they asked, ‘Were you there for 9/11?’ The conversation froze. When I got back, the name [Debbie Downer] popped into my head.”

When you're excited about somethin but Debbie Downer comes in just to remark how hard and joyless their life is
@_kerrisays, April 10, 2017
We all have a friend named Debbie, Debbie Downer to be precise.
Madeline Rocco, “How To Keep The Party Lit With A Debbie Downer In Your Squad,” Unwritten, December 9, 2015
It’s usually easy to identify that Negative Nancy or Debbie Downer who wreaks havoc on office morale or who drags down the festive spirit at a family function.
Amy Morin, “5 Ways to Stop Giving Debbie Downers and Negative Nancys Too Much Power in Your Life,” Huffington Post, February 19, 2015
SEE MORE EXAMPLES

While the term began on Saturday Night Live, it’s become such a recognized character trope that it is commonly now used widely to refer to an extremely negative person.

In a later Debbie Downer sketch, writers also created a companion for Debbie called Bob Bummer. Similar variations on the name include Negative Nancy and Negative Nellie, which harken back to Nervous Nellie, a constantly timid or worrisome person, a derisive nickname used to mock US politician Frank Kellogg in the 1920s.

This is not meant to be a formal definition of Debbie Downer like most terms we define on Dictionary.com, but is rather an informal word summary that hopefully touches upon the key aspects of the meaning and usage of Debbie Downer that will help our users expand their word mastery.