What does ded mean?

Ded is a humorous, often ironic, deliberate misspelling of dead.

It can be used when something finds something so funny, overwhelming, or outrageous that they are metaphorically “dead.”

It can also used in the internet language of DoggoLingo, particularly as a playful way to describe a sleeping pet.

Where does ded come from? 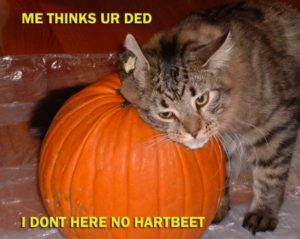 An early use of ded comes from a folk etymology for the old navigation term dead reckoning, a way of calculating your location, especially at sea, by estimating the distance and direction you’ve traveled. Starting in the first half of the 20th century, dead reckoning was sometimes spelled ded reckoning out of the mistaken belief that the expression was actually deduced reckoning.

Ded surfaced online as early as the early 1990s on message boards to represent colloquial or regional speech. We can find ded for dead, as in the humorous exaggeration I’m dead in response to something extremely funny or frustrating, by the 2000s, including on Urban Dictionary by 2003.

Online, deliberate misspellings can be used for convenience or irony (e.g., wut for what) … or, in the case of internet languages such as DoggoLingo, cuteness. Consider smol for “small” or chonky for “chunky.” So, when people post about cute animals online, ded can referring to sleeping pets who are so zonked out it’s as if they are dead, or ded.  It can also be used in reference to puppers playing ded. 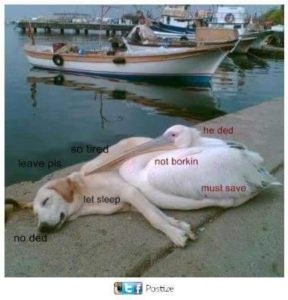 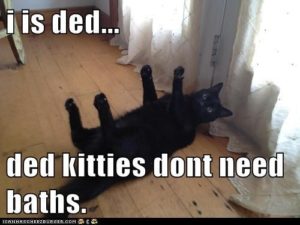 Ded can be used online, in social media, or in texts in response to something hilarious or highly enjoyable. It’s often used in the expression I’m ded or within dramatic or emphatic asterisk: *ded*

Sometimes, as often seen among K-pop fans, ded refers to being so excited or overwhelmed by something that it “kills” you.

Ded sees some use when someone is feeling extremely frustrated or angry.

Ded is seen especially in DoggoLingo or other animal-related, internet content (e.g., LOLcats). It is often used for when an animal is sleeping or playing dead or has destroyed a toy.

Sometimes ded is just a misspelling of dead, with no ironic intent.

This is not meant to be a formal definition of ded like most terms we define on Dictionary.com, but is rather an informal word summary that hopefully touches upon the key aspects of the meaning and usage of ded that will help our users expand their word mastery.