What does dolo mean?

You rolling dolo to the dictionary? If you are, that means that you’re doing it alone. It often appears as solo dolo.

forever alone, We Are Number One, trill, realest

Where does dolo come from? 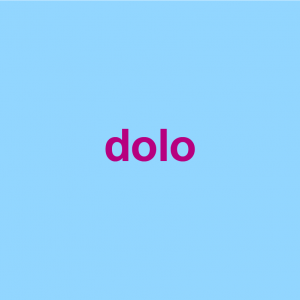 Put simply, dolo is “solo,” e.g., I’m rolling dolo into the club, or going alone as opposed to with friends. Dolo can also mean “secretly” or, to use another slang expression, on the down low. Dolo often appears in the phrase solo-dolo, which can mean doing something alone but, apparently, being chilled about it.

Dolo originates from Black slang in the 1990s. Its origin is obscure, but it’s hard to resist a connection to 1) the first two letters in the words down low and 2) the rhyming reduplication for solo (cf. super-duper). One early instance comes from an internet Usenet post in which a user said he’d have to go to a new movie solo-dolo because his friends had already seen it. Rolling dolo popped up in a 2003 issue of Vibe magazine, and by 2004, it made its Urban Dictionary debut.

In 2009, the term inspired a clothing line, Dolo, which defined the term as “solo” and saw in it “the strength to be an individual.” Also that year, artist Kid Cudi released the track “Solo Dolo ‘Nightmare,'” helping to popularize the term. The song, a meditation on feeling like one is all alone, features the hook: “When I’m closing my eyes / I’m Mr. Solo Dolo.”

Definitely avoid smoking in a large group but never do it dolo.
Julian Sonny, Elite Daily, November 9, 2015
This year I’m going to a fancy ass restaurant, fly ass fuck just to get drunk dolo or not cause that’s been my goal
@ColladoSteven, August 31, 2018
My apartment looks out on the resort-like courtyard of my building, but only like 15 people live here still, so I’m just going to keep having solo dolo dance parties on the balcony until someone says something.
@ziibiing, August 25, 2019
SEE MORE EXAMPLES

Both dolo and solo-dolo can mean doing something alone. In some cases, they imply enjoyment or confidence in solitude, i.e., you’re sufficiently self-assured that you don’t have to rely on others to do something out in the world.

Ain’t nobody really on my vibe right now, I just stick by myself solo dolo 🗣💯

Dolo and solo-dolo are often used in contexts where one comes to empowering self-realizations by virtue of being all alone. Sometimes these episodes are helped along by special substances …

being dolo make you realize so much shit😏

Occasionally, dolo and solo-dolo can imply the negative connotation of being a loner or loser. The term remains mostly used in Black English.

This is not meant to be a formal definition of dolo like most terms we define on Dictionary.com, but is rather an informal word summary that hopefully touches upon the key aspects of the meaning and usage of dolo that will help our users expand their word mastery.